Democrats have been downplaying Republican concerns about voter fraud but it appears that there are at least some reasons for their worries. Yesterday, Vote from Home folded operations in Ohio because it was learned that some of their members had indeed voter incorrectly. Their votes were disallowed. Some Obama workers have withdrawn their votes as well.
Another effort to organize voters is Vote Today Ohio. Co-founded by Tate Hausman, a political organizer and member of the Working Families Party in New York, Vote Today Ohio says that the group exists to bring unlikely voters into the polls and boasts that they are responsible for at least 3300 votes.
Watch this report from Palestra.net for the background.
The organization’s Facebook group page has this description:

Progressives from Ohio and all over the USA are banding together to turn out new and unlikely voters during Ohio’s Early Vote Period (up until Nov 3). Early votes are smarter and easier to cast, and they can’t be lost to long lines, broken machines, or GOP tampering on Election Day.

The window of opportunity is referred to as Golden Week:

What’s this “Golden Week?”
Ohio recently changed its voting laws in a way that creates an extraordinary opportunity for Democrats to win Ohio, and thus win the election. For a 7 day window, from Sept 30 – Oct 6, Ohio residents can register and vote early in all of Ohio’s 88 counties. That means we don’t need to spend double the time and energy registering folks, and then turning them out to vote a month later. During the Golden Week, it all happens in one fell swoop — so our energy and money works doubletime.

As far as I can tell, no one leading VTO is from Ohio or intends to remain in Ohio. The leaders listed on the Facebook group with their location are Tate Hausman, Amy Little (Poughkeepsie, NY), Billy Wimsatt (New York, NY), Pam Kapoor (Ottawa, ON), Yolanda Hippensteele (East Bay, CA). Ms. Little was the campaign manager for progressive democrat John Hall’s successful campaign for the U.S. House of Representatives in 2006.
Tate Hausman made it clear on his blog that he was going to Ohio, not to become a resident but to organize for Obama. And his blog makes it clear that he resides in New York City where he recently had a meet and greet for another Working Families Party member, Daniel Squadron.
He announced his new Vote Today Project project on September 11, 2008.

In my never-ending quest to make our government more progressive, I’ve gotten myself mixed up in an exciting new campaign. Actually, I’m running it.

He notes the transient nature of the effort.

(Note: This is going to be a super-intense campaign, without much time to blog, much less eat or sleep. Forgive me if I go radio silent for a while.)

As noted above, Mr. Hausman is a member of the Working Families Party. Like the New Party before it, the WFP seeks to encourage fusion voting, meaning allowing a candidate to represent more than one party. The political strategy of the Working Families Party also reprises the New Party via electing far left Democrats to replace centrists. Mr. Hausman describes the method:

My friends at the Working Families Party have chosen Daniel as one of their top races this year, because he could be a poster child for the WFP’s strategy of replacing “bad” Democrats (centrist, corporate, do-nothings) with “good” Democrats (progressive, responsive, high integrity).

While organizing here, at least three of the VTO people have registered to vote according to the Franklin County Board of Elections website. There registrations are here. As you will see, they have received absentee ballots to the 1979 N 4th street address.
Ms. Little’s registration is posted as an example. The other two are here (Hausman) and (Hippensteele). 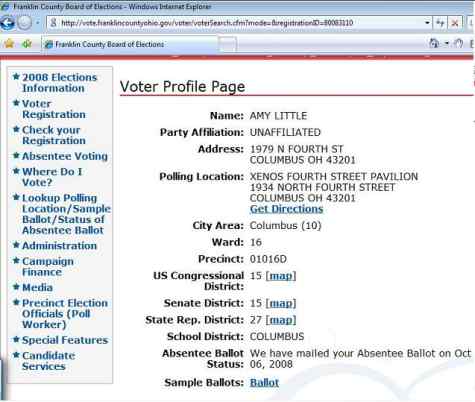 I am not aware if there has been any official investigation into these registrations and I do not know if these individuals have actually voted. It does not appear that Mr. Hausman and Ms. Little intend to remain in Ohio and they reside in New York. I do not know what Ms. Hippensteele’s intentions are regarding the Buckeye state.
The broader concern is the potential for abuse. The reporting of Palestra.net (kudos to Tiffany Wilson and crew who have been all over this story) raises serious concerns about the integrity of the election in Ohio.

Vote Today is an effort which is calling people from all over to come vote in Ohio — After all, Ohio is the heart of it all!

Watch this and note the party affiliation of Tate Hausman – Working Families.
Following the link to their website, you will find that this party has endorsed Barack Obama. Also, if you read long enough, you will find that the Executive Director of the Working Families Party is Dan Cantor. Mr. Cantor is the co-founder of the socialist New Party that Mr. Obama belonged to in the late 1990s. Apparently, the Working Families Party is the remnant of the New Party. You can get to the Working Familes Website via a link on the New Party website.
So in my home state, you have a neo-socialist party bringing in people who do not live in Ohio to vote for Obama. I wonder if Ohio Secretary of State Jennifer Brunner watches Palestra.net.
Viva la revolucion!

This is big… Some of these folks came to Ohio just to vote for Obama.