The Institute on the Constitution did not succeed in getting their course on the Constitution in the Springboro (OH) school district but they may have found a way into a public school in Florida. According to posts on the IOTC Facebook page, director of IOTC and League of the South board member Michael Peroutka spoke to the American Club at Spanish River High School in Boca Raton, FL. Watch:

According to the young man in the video, the club wants to work more with IOTC. Here is a bit more about the IOTC plans at Spanish River. I suspect there will be some folks in the area who will not be excited about the prospects of IOTC in the high school.
For more on IOTC click here.
Spanish River Community High School was in the news back in February when the school principal stopped a presentation by Bradlee Dean, founder of You Can Run But You Can’t Hide. The same club — the American Club — was involved in that Dean was invited by the students in that club to speak at the school. According to World Net Daily, Dean was eventually allowed to give his speech after a letter from Liberty Counsel claiming discrimination was delivered to the school. Jake MacAulay used to work for You Can Run but now works for Michael Peroutka.

I posted last week that Florida Attorney General and Republican candidate for Governor, Bill McCollum hired George Rekers as an expert in a gay adoption case over the advice of his staff. The state lost the case and the ban on gay adoption was set aside by Judge Cindy Lederman. Lederman took strong exception to Rekers’ work, saying that Rekers’ testimony “was far from a neutral and unbiased recitation of the relevant scientific evidence.” Despite the apparent harm the testimony did to the case, AG McCollum defended Rekers in a brief filed August 6, 2009 before a Florida state court of appeals seeking to overturn the lower court ruling. More specifically, McCollum defended Rekers’ religious writings and the evidence Rekers presented in defense of the ban on gays adopting children.

However, on one point McCollum contradicts his expert without acknowledging the contradiction. Rekers testified that one might exclude Native Americans from adopting if it could be shown that, as a group, they had higher rates of many distressing conditions. Here is Rekers’testimony:

Q. Well, Dr. Rekers, earlier you testified that Native-Americans have a higher rate of alcohol abuse than the general population does, right?

The Court: I think you can add violence to that, as well.

Q. And violence, as well.

A. Yeah, if it turned out that a majority of the individuals in the Native-American population, that a majority of them were high risk for one of these things happening, as a lifetime prevalence, there could be a parallel rationale for excluding them, as adoptive parents, because it would be not only them, they would tend to hang around each other. So the children would be around a lot of other Native-Americans, who are doing the same sorts of things, you know. So it would be a high risk, and, in fact, since you can’t perfectly predict human behavior, the best you can do and the best the State can do is to look at risk levels, and if a particular kind of household poses multiple high risks for condition that would be detrimental for children, then that would be a rationale for excluding that group.

Perhaps, with hindsight, Dr. Rekers would reconsider his testimony. However, there is no indication that it was ever amended or directly addressed by the state of Florida. However, here Rekers provides a rationale for excluding Native Americans along with homosexuals.  The line of questioning seems as though it was designed to get Rekers to make some sort of distinction between sexual orientation and race.  However, at least in this instance, he did not.

Perhaps one reason they do not take such arguments seriously is because such arguments would likely be dismissed in a real public debate or in a court proceeding. When arguing racial issues, courts take a more strict review of any governmental action to discriminate on the basis of race. Generally, on matters of race, if a government policy burdens an individual due to racial category, the government policy will not survive. AG McCollum argues in the 2009 appeal that the adoption case should be decided on a rational basis test. In this test, the government is generally given the benefit of the doubt in crafting laws when no fundamental rights or suspect classes are involved. McCollum argues and all agree that adoption is not a fundamental right and he also argues — and this is where the disagreement comes — that homosexuals are not a class worthy of the strict scrutiny test.

On page 8 of the appeal, McCollum discusses the matter of Native Americans and adoption. 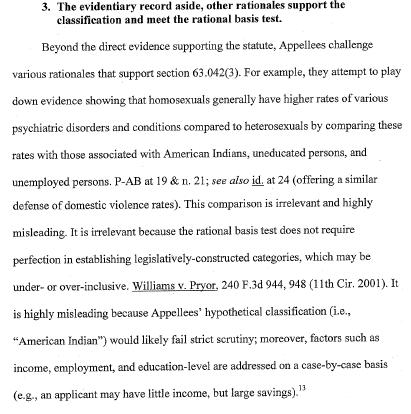 McCollum here contradicts Rekers by saying that the category of Native American “would likely fail strict scrutiny.” This means the Florida legislature would have to have a much higher burden of proof as to why violation of the equal protection clause — e.g., excluding Native Americans — would serve a compelling state interest. What surprised me here, and perhaps it is because I am not a lawyer, is that the appeal narrative does not mention the testimony of Rekers in this section, even as Rekers is defended in the other sections of the appeal. Rekers clearly testified that the basis for exclusion in his opinion was the higher rates of distressing conditions. In the appeal, McCollum addresses the theory but does not address the fact that his own expert failed to make categorical distinctions.

The ways that some conservatives think about gays confuse me. On one hand, gays are considered a cohesive enough group with characteristics so common that they can be lumped together. When viewed this way, Rekers-style testimony is offered about the high rates of distressing problems and thus, how the entire group of people should be viewed negatively. However, on the other hand, some social conservatives do not consider homosexuals  to be related enough to be a suspect class. Some go so far as to say there is no such thing as a homosexual, rather heterosexuals with homosexual behavior or problems.

McCollum then continues his argument that sexual orientation does not warrant a strict scrutiny standard. 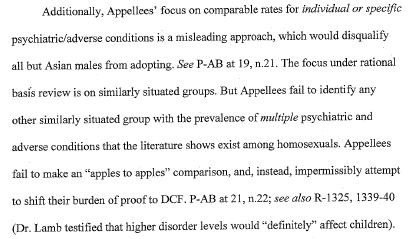 McCollum here continues to argue that one distressing condition is not sufficient, or else only Asian males could adopt. However, McCollum wants the appeal court to know that the lower court did not demonstrate any other group like homosexuals, who have as many problems. Without acknowledging it, McCollum disagrees with his expert to further serve his case.

In this situation, I don’t think there is a fundamental right to adopt or be adopted so I am not sure how this case will turn out.  However, a troubling thing here is the reasoning which invalidates individual rights due to membership in a particular group. It should make everyone a little nervous when individual gays are judged due to rates of distressing problems among larger groups of gays. Even on a practical level, such stereotyping can become the basis for predjudice and discrimination. Christians complain about this and we have freely chosen our beliefs. We don’t like it when such logic is used against us, and we should be very careful about where such thinking can lead.

UPDATE at the end of the post…
There are many stories of voter fraud this election and I have reported at least one major one in Ohio. The situation here may violate the spirit of those laws. I do not know how Florida officials will view this but I hope to find out tomorrow. This is from Obamatravel.org. I wonder how long this page will stay up.

And here is Ms. Appleton holding her ballot:

To summarize, Ms. Appleton has been FL for 6 weeks, says she voted in FL, but plans to return “home” to NY a day or so after the election. According to this link and this one, Ms. Appleton’s residency is open to question. If I am missing something and this is legal, I do not think it should be. At least as long as we have an electoral system of electing a president, it seems fundamentally contrary to that system for people to leave “safe states” for a candidate (in this New York) and go to a battleground state to cast a ballot. It seems as though campaigns would spend their resources moving people from safe states to contested states. Maybe that is the point of this Obamatravel.org thing…
UPDATE: Earlier today, I spoke with Owen Torres, spokesperson for Miami-Dade County, and he clarified that one must register 29 days before an election which Ms. Appleton did in Miami-Dade County. He stressed that she would be allowed to vote in FL if she is registered which one may do whenever one moves to the state of FL. However, he said, she should not be registered in more than one state (which she is according to the Westchester County, NY BOE), but this is not illegal in itself. It would be illegal to vote in two places. What is problematic is Ms. Appleton’s expressed intention to leave FL to return “home” to NY as soon as the election is over. According to Mr. Torres, FL anticipates that the person who registers is doing so because they have become a resident of the state and intends to remain in the state. With the election happening tomorrow, I am not sure if I will hear the outcome of this particular situation soon. However, Mr. Torres indicated that he would pursue the matter.
UPDATE #2 – Commenter Tom pointed out that Ms. Appleton’s profile on Obamatravel.org has been removed.
UPDATE #3 – Palestra.net’s Tiffany Wilson made contact with Ms. Appleton but she declined to speak to Ms. Wilson. And Ms. Wilson notes this about FL election law:

101.045 Electors must be registered in precinct; provisions for change of residence or name. —
Chapter 101 VOTING METHODS AND PROCEDURE
Title IX ELECTORS AND ELECTIONS
SUCH PERSONS WHO ARE REGISTERED in the precinct in which the main office of the supervisor, as designated by the supervisor, is located and who are residing outside the county WITH NO PERMANENT ADDRESS IN THE COUNTY SHALL NOT BE REGISTERED ELECTORS OF A MUNICIPALITY AND THEREFORE SHALL NOT BE PERMITTED TO VOTE IN ANY MUNICIPAL ELECTION.