If the Institute on the Constitution leaders can’t get these easy quotes right, then how can they be trusted to teach the Constitution?
This time it is Jefferson again. IOTC has Jefferson saying, “That government is best which governs least.” According to the ever reliable Anna Berkes at Monticello, Jefferson didn’t make that quote. 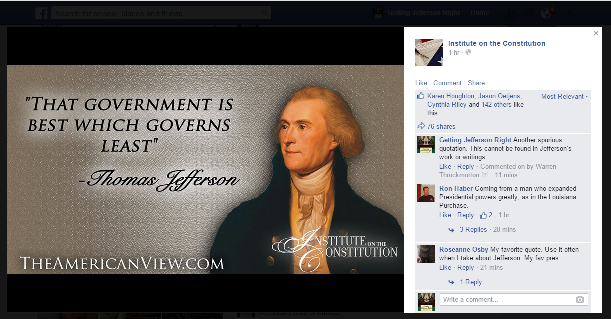 The IOTC has falsely attributed quotes to George Washington (twice), Thomas Paine, and to Jefferson (twice). It certainly looks like they don’t care. To my knowledge, they have never corrected the false information or removed the fake quotes.
UPDATE: Someone who runs the IOTC Facebook page said the following in response to my assertion that the Jefferson quote was false.

Add Fox News Todd Starnes to the short list (including David French and Bryan Fischer) to the list of prominent conservatives who are defending symbols of the Confederacy.
In a column today, Starnes made fun of the Fort Smith, Arkansas school board for phasing out their Rebel mascot and removing Dixie as the school fight song. More precisely, the school board met as a committee of the whole and voted to make it official during an upcoming meeting. According to a notice on the district’s Facebook page (which Starnes partially cited), the changes are being made because the racist symbolism.
The board wrote:

Giving great consideration to the continuing impact of perceived symbols of racism on the community, state and nation, the Fort Smith Public School Board convened as a Committee of the Whole tonight and passed a motion to discontinue the use of “Dixie” as the Southside High School fight song in the 2015-2016 school year, and to phase out the use of the Rebel as the Southside mascot in the 2016-2017 school year.

This motion passed with a 6-0 vote and will be presented to the Board during the regularly scheduled meeting on July 27, 2015. The Rebel and “Dixie” have been used as the Southside High School mascot and fight song since the school opened more than 50 years ago. The Board understands the challenges of changing what has come to be the tradition of the Southside High School community, and will work with the student body and staff over the next year to name a new mascot and fight song for the school.

While this is sure to be controversial, it shouldn’t be. The Civil War was over a long time ago. It is time to move past Rebels and Dixie. Nothing seems clearer now; except to Todd Starnes. He closes his “news” break with this:

Folks around Fort Smith aren’t too keen on the idea of removing either the mascot or the song. Many posted their extreme displeasure on the district’s social networking sites.

“It appears to be a knee jerk reaction influenced by current events,” one reader wrote. “Removing flags or historical symbols because they may offend a number of people is a slippery slope.”

I’m curious, though, about this idea of perceived symbols of racism. It really is subjective, isn’t it?

I mean – I could perceive the Fort Smith School Board to be a bunch of dim-witted, dingleberry lefties who don’t have the sense God gave a goose.

But I could be mistaken.

However — in this case, I’m more than likely right.

And I’m not just whistling Dixie.

"We think it's a memorial to our ancestors who fought to stop an invasion." Pat Hines, SC League of the South pic.twitter.com/dvt9IDeRtP

At one point near the end, Hines wondered why another guest (a South Carolina state legislator) was working for the “cultural genocide” of the Southern people by advocating removal of the Confederate flag. The incredulous response of the guests and host Don Lemon was the same as mine. You (Hines) can’t be serious. A symbol of slavery does not represent any good thing about anyone’s culture.
It was surreal seeing a representative of the League of the South as a guest on CNN. The leader of the League of the South. Michael Hill, has warned African-Americans about a race war and wants the Southern states to secede and become a homeland for whites. He has no problem being known as a white supremacist. His most recent rant is unhinged.
On another front, it has been surreal for a couple of years to know that members of the League of the South are leaders of a self-described effort to educate students and the public about the Constitution. Regular readers know I am talking about the Institute on the Constitution. Founder and director Michael Peroutka is a former board member of the League. David Whitney, IOTC senior instructor, is currently listed as chaplain of the Maryland/Virginia branch of the League (see image below).
At a news conference prior the Peroutka’s election to the Anne Arundel County Council, Peroutka defended the League, calling it “a Christian free-market group.” Peroutka said he quit the group but his Senior Instructor (Whitney) is a leader in the state branch and Peroutka has never denounced the League. Peroutka has also said he didn’t know any racists in the League but that stretches belief.

Governor Nikki Haley has called for the removal of the Confederate flag from the grounds of the South Carolina capitol and I agree with her.
Why did it take so long?
The argument that it is about heritage not white supremacy is a tired, silly argument. Anyone who understands how offensive the flag is would not display it. There can be no other reason but to send a message of intimidation.
Southern nationalists will go nuts but that isn’t reason enough to keep it. They are all over themselves trying to distance themselves from Dylann Roof while defending what Dylann Roof believes about African-Americans.
Of course, they have a right to hold and voice their opinion. However, so do I and other Americans who are tired of the deadly games they are playing.
There is a history to why the flag is there, but that is less important that the future. Removing it will symbolize the future of the state and send a clear message to the League of the South and the Council of Conservative Citizens that the cause really is lost.

The Institute on the Constitution claims to be an educational outreach of Michael Peroutka’s law firm. Miseducational outreach would be a better term. They claim to teach about the founders but they often are sloppy and attribute things to the founders they didn’t say.
Once, they claimed Jefferson said something he didn’t say and then they botched George Washington as well.  Now, the target of false quotation is Thomas Paine.

Paine never said it; it most likely originated with Edward Abbey.
Note that it has been shared 1600 times. That’s a lot of ignorance for which IOTC is responsible.
For those keeping track, IOTC’s senior instructor is still listed as chaplain of the Maryland/Virginia chapter of the League of the South, a white supremacist organization.

The Institute on the Constitution just can’t seem to get quotes right.
On their Facebook page, the neo-Confederate organization periodically features quotes they claim come from the founders. However, the quote are often spurious.  The most recent one attributed to Thomas Jefferson was posted earlier this month:

How fitting for the times we are in!www.theamericanview.com
Posted by Institute on the Constitution on Tuesday, April 7, 2015

This appears to be derived from Ayn Rand, but not said by Jefferson; so says Monticello.
This isn’t the first time. IOTC has promoted other false quotes (see here, and here).  If they can’t get easy stuff right, makes you wonder what they teach in their trainings. Actually, I don’t have to wonder since I have seen the video presentation of it. Not recommended (e.g., see here, and here)

Who made the potentially illegal robocalls? Watch this investigative report by WUSA:

Another interesting aspect of this report is Michael Peroutka’s spokesperson: Peter Waldron.

“Councilman Peroutka’s policy is not to comment on ongoing investigations,” said Peroutka spokesman Peter Waldron in an email to WUSA9.

Could this be the same Peter Waldron that worked for Michele Bachmann’s failed run for the Republican nomination for president in 2012?

As I reported recently, the League of the South president Michael Hill announced their plan to celebrate the life of Lincoln assassin John Wilkes Booth. Plans are apparently coming together for an April celebration in Maryland. According to Hunter Wallace:

We’ve been getting a lot of publicity from the media for announcing that we are going to hold a public celebration of Lincoln’s assassination, but it is something that many of us have done privately for years now.
Note: This event will be held in Baltimore on April 11th. It is pretty much our equivalent of Martin Luther King, Jr. Day. Contact me for details.

Maryland is home to the Institute on the Constitution and former League of the South board member Michael Peroutka. In addition, IOTC senior instructor David Whitney is chaplain of the Maryland/Virginia branch of the League. I wonder if Rev. Whitney will offer prayers at the event.
Michael Peroutka once said the Institute on the Constitution led him to involvement in the League of the South.  Perhaps the IOTC could offer a session on the constitutional basis for assassination.

On the League of the South website, League president Michael Hill wrote today:

The League of the South looks to the present and future. However, from time to time we do look back at our past.

This 14th of April will mark the 150th anniversary of John Wilkes Booth’s execution of the tyrant Abraham Lincoln. The League will, in some form or fashion, celebrate this event. We remember Booth’s diary entry: “Our country owed all her troubles to him, and God simply made me the instrument of his punishment.” A century and a half after the fact, The League of the South thanks Mr. Booth for his service to the South and to humanity.

Booth considered slavery to be a blessing.

Currently, the senior instructor of the Institute on the Constitution, David Whitney, is the chaplain of the Maryland/Virginia branch of the League of the South. The founder of the IOTC, Michael Peroutka says he is no longer a member but thanked Hill for the League’s support in Peroutka’s November election to the Anne Arundel County (MD) Council.

Martin Luther King, Jr.’s “I Have a Dream” speech during the March on Washington on August 28, 1963 (turn up the volume).
[youtube]http://youtu.be/smEqnnklfYs[/youtube]
Sadly, civil rights revisionists such as the Institute on the Constitution assert that civil rights laws should not have been passed. Thank God they were passed and as Dr. King said, “we cannot turn back.”