Yesterday, I noted concerns about the teaching of the Institute on the Constitution on the National Religious Broadcasters network. Last night, the problems continued during Michael Peroutka’s teaching on amendments two through ten. To bolster his interpretation of the 2nd Amendment, Peroutka cited four founders on guns. One of them is a citation either fabricated or falsely attributed to George Washington, two of them were not cited in proper context, and one was cited properly.
Exhibit A in Peroutka’s speech was this quote he attributed to George Washington: 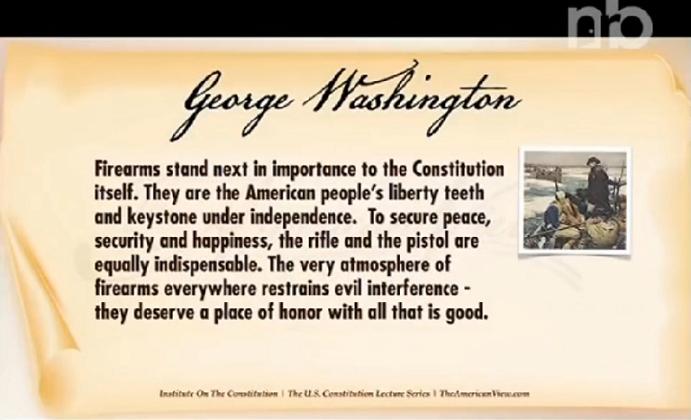 First, I looked for this quote in the digital Papers of George Washington and couldn’t find anything. Then, I found a reference to the quote on the Second Amendment Foundation website. Listed under the heading: “BOGUS, FAKE & QUESTIONABLE QUOTES FALSELY ATTRIBUTED TO THE FOUNDING FATHERS,” the quote has been researched by the SAF with no success in linking it to Washington. According to the SAF, this is “perhaps the most ‘infamous’ bogus saying attributed to a Founding Father.”

The Constitution shall never be construed…to prevent the people of the United States who are peaceable citizens from keeping their own arms.

Several sources attribute this proposal to Samuel Adams in the context of the Massachusetts convention to ratify the Constitution. Adams included this proposal along with others.

A motion was made and seconded, that the report of the Committee made on Monday last, be amended, so far as to add the following to the first article therein mentioned, viz.: And that the said Constitution be never construed to authorize Congress to infringe the just liberty of the press, or the rights of conscience, or to prevent the people of the United States, who are peaceable citizens, from keeping their own arms, or to raise standing armies, unless when necessary for the defence of the United States, or of some one or more of them, or to prevent the people from petitioning, in a peaceable and orderly manner, the federal legislature for a redress of grievances, or to subject the people to unreasonable searches and seizures of their persons, papers, or possessions.

And the question being put was determined in the negative.

For a complete picture of the sentiment of the day, it would have been helpful for Peroutka to include the context and the fact that the Massachusetts convention failed to approve this language. Furthermore, Adams’ reference to “peaceable citizens” could be taken as a qualification on the right to bear arms. In his NRB broadcast, Peroutka argues that the founders believed possession of arms was a deterrent to government tyranny. However, it could be argued that Adams was not referring to citizens who were seditious or who did not keep the peace.

Next, he cites Thomas Jefferson with a brief quote:

No freeman shall ever be debarred the use of arms.

The Jefferson quote is taken from Jefferson’s first draft of the Virginia Constitution. However, Jefferson revised this draft in a way that works against Peroutka’s contention. Jefferson’s 2nd and 3rd draft added a qualification to the first draft. Here are all three drafts:

As the Monticello website notes, the draft language was not included by the Virginia legislature into the final Constitution. Jefferson, writing these drafts in 1776, was not referring to the 2nd Amendment. Furthermore, Jefferson qualified his earlier statement by locating the freedom for freemen to their own property. Although the later drafts undermine Peroutka’s argument, he should have made his audience aware of Jefferson’s final draft.
Peroutka then cites Noah Webster accurately.
The 2nd Amendment is important to the IOTC in that they back local sheriffs and police chiefs like PA’s Mark Kessler who claims the 2nd Amendment is a conceal carry permit and who promote the nullification of gun control laws. While some quotes from founders can be advanced in support of a broad reading, other quotes must be invented or adapted.
In any case, NRB viewers now have some history to unlearn. How will this happen?