Today, a federal judge in Western Arkansas ruled that one of the fraud and racketeering cases against Gospel for Asia will go to trial in 2019. U.S. District Judge Timothy Brooks set the date for a jury trial on April 15, 2019.
Despite numerous legal maneuvers by GFA’s lawyers, the Murphy RICO case will move ahead. This is a significant win for the plaintiffs since GFA has tried on multiple occasions to have this and another case thrown out. The earlier case involving another Arkansas couple, Matthew and Jennifer Dickson, has been stayed pending an appeal by GFA.
Read the scheduling order here.
The 10 page order in Murphy and Murphy v. Gospel for Asia sets the dates for discovery throughout the remainder of this year and 2018:

A settlement hearing was scheduled for January 31, 2019 in the event that the parties decide to settle.

K.P. Yohannan and his co-defendants will need to be in attendance for this conference.
GFA must now submit to scrutiny that the organization has been resisting. GFA has not published an audited financial statement since FY 2013 and lost membership with the Evangelical Council for Financial Accountability in October, 2015.
I believe the GFA action is one of the largest evangelical charities to face a lawsuit of this kind.

I am not betting on it.

The Calvary Chapel Senior Pastors Conference ended yesterday with no public statements from anyone within the Calvary Chapel movement about Gospel for Asia. GFA exhibited at the conference but left their table unmanned much of the time according to sources there. Several pastors, speaking on condition of anonymity, told me that their church would soon drop support for GFA due to GFA’s public silence about various financial, personnel and leadership concerns.
Several sources have told me that GFA is holding up their membership in the Evangelical Council for Financial Accountability as proof that no real problems exist. Furthermore, GFA insiders have told me that ECFA executives have reviewed GFA’s finances and is privately expressing confidence in GFA. ECFA leaders have ignored my requests for clarification or explanation about the missing money, money carrying to India, etc.
Mars Hill Church similarly pointed to ECFA membership as an indication that funds were being used properly. Even as the church did that, Mars Hill made changes to their procedures to come more into compliance with ECFA guidelines. What I learned about ECFA via the Mars Hill experience and then later through ECFA’s handling of Faith Christian Church is that donors cannot count on ECFA to disclose problems with members.
Now ECFA membership is being used by GFA to avoid explanations of multiple concerns raised by around 100 former employees, former donors, and bloggers. In my opinion, ECFA is now responsible for whatever problems GFA manifests. Here again is a summary of issues that GFA and ECFA have ignored.

Millions of dollars are unaccounted for and GFA has not given any reasons or explanations. Now GFA is claiming that ECFA has seen the books and has given the all-clear.
Since GFA won’t be accountable, I publicly call on ECFA to provide information relevant to list of concerns listed above.

Canadian law requires charities to file information on their activities with the Canadian Revenue Agency. Gospel for Asia has a Canadian affiliate and that organization took in just over $17 million in 2013. The CRA requires charities to complete Form T3010 which captures disclosure of where and how donations are spent. In the case of Gospel for Asia, the T3010 shows that GFA’s Canadian affiliate sent $ 15,172,204 to India in 2013. The webpage showing this information is captured below: 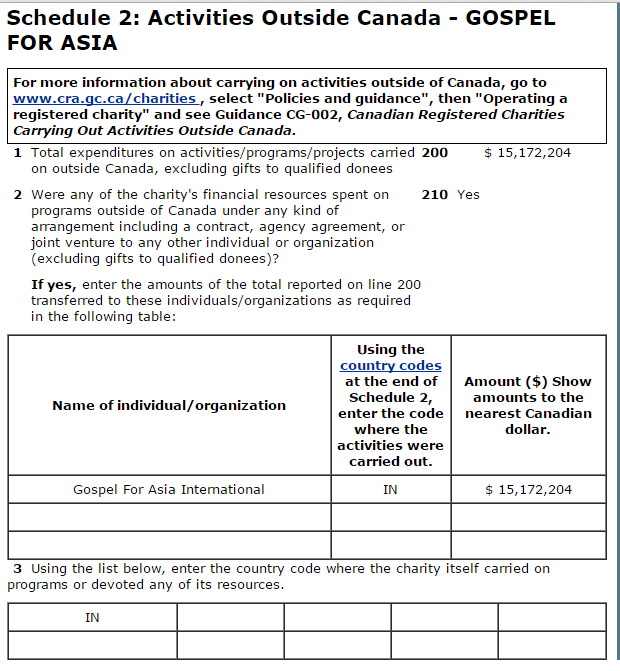 The activities to be carried out with those funds are listed in the T3010 form:

Providing education to children of the Dalits and untouchables of India. Medical missions – treating the poor and needy in rural areas on the Indian subcontinent. Providing assistance in the slums. Literacy programs for illiterate adults. Disaster relief for natural disasters. Providing water for undeveloped communities. Sharing the love of God by meeting the basic needs for those below the poverty line. Sheltering street children.

According to Magali Deussing, Media Relations Advisor and Spokesperson for the Canadian Revenue Agency, Canadian charities, by law, “can only use its resources (for example, funds, staff, and property) in two ways, whether inside or outside Canada.” Those two ways are:

A registered Canadian charity is required to report annually to the Canada Revenue Agency (CRA) on its expenditures, and maintain adequate books and records so that the CRA can validate whether the charity’s funds are being appropriately applied to its own charitable activities (whether inside or outside Canada), or on gifts to other qualified donees. If a charity reports to the CRA that it has spent its resources on a certain program or activity, it is incumbent upon the charity to validate that expenditure or allocation of resources.

Form T301o lists “qualified donees” and Gospel for Asia International is not one of them.

The CRA recommends adopting the following types of measures to direct and control the use of a charity’s resources:

If a charity simply takes donations and funnels them to another organization, the Canadian charity might be considered a conduit — which is illegal in Canada. The CRA defines a conduit:

For this guidance, a conduit is a registered charity that receives donations from Canadians, issues tax-deductible receipts, and funnels money without direction or control to an organization to which a Canadian taxpayer could not make a gift and acquire tax relief.

One way that transferring money to an organization overseas does not of necessity create a conduit is if the money goes to a “head body” outside of Canada. In the case of GFA, the Indian operation mighr be considered a “head body.” The CRA website addresses this question:

Appendix C – What if a charity has a head body outside Canada?

Some charities are registered as the Canadian representatives or offshoots of a larger organization, often located outside Canada. These head bodies sometimes require payments from their Canadian charities, in the form of tithes, royalties, memberships, or similar transfers.

The same requirements for the direction and control of resources apply to charities that are offshoots of head bodies outside Canada. In other words, a charity may not simply send gifts of money to a non-qualified donee, even if that non-qualified donee is the charity’s head body.

However, having the head body act as an intermediary for a charity is also often not practical, since the nature of the relationship may prevent the charity from instructing its head body in how to use the money. In these cases, the charities must be sure they are receiving goods and services equivalent in value to the amounts they are sending.

For example, a head body might provide a Canadian charity with any of the following:

The CRA will generally accept that a charity with a head body outside Canada usually benefits from access to useful resources from that head body such as policies, communications, and training material. If a charity transfers small amounts to a head body, and the charity has access to internationally produced material, we will not require additional evidence of benefits to the charity.

For these purposes, we will probably consider a small amount to be whichever amount is less—5% of the charity’s total expenditures in the year or $5,000.

I wonder what Canada is getting from GFA International that is worth $15 million. Note this line:

Canadian Donations Don’t Show Up in Indian Reports
According to the Canadian report, GFA Canada sent the lion’s share of donations from Canadians to do work in India. However, in Indian public charity documents (yearly FC-6 forms), GFA Canada doesn’t show up.

On the website where Indian charities record their activities, Gospel for Asia is required to indicate the source country of donated funds. In the image below, source countries are reported for 2013-2014 (see pdf of page):

GFA: Canadian Funds Are Combined with U.S. Funds in India
Canada does not show up. I checked the other three entities controlled by GFA (Believers’ Church (pdf), Last Hour Ministries (pdf), and Love India Ministries (pdf)) and found no reference to Canada as a source for those funds. I asked GFA COO David Carroll about the absence of Canada and he told me:

The Canadian funds were combined with U.S. funds by our auditor in India for various accounting reasons. There is no requirement that they be reported separately.

I wrote back to ask for the auditor’s rationale and Carroll declined to address the question.

According to Canadian law, Canadian charities must retain control of the funds, must keep separate books and records, and must be able to show that the funds were spent on the charity’s mission. Perhaps GFA in Canada can do that. However, on the Indian side, there is no way to verify it.

What seems odd about Carroll’s explanation is that the Indian website requires the donors of those funds to be identified. For instance, in 2013-2014, the following donors were identified by GFA. 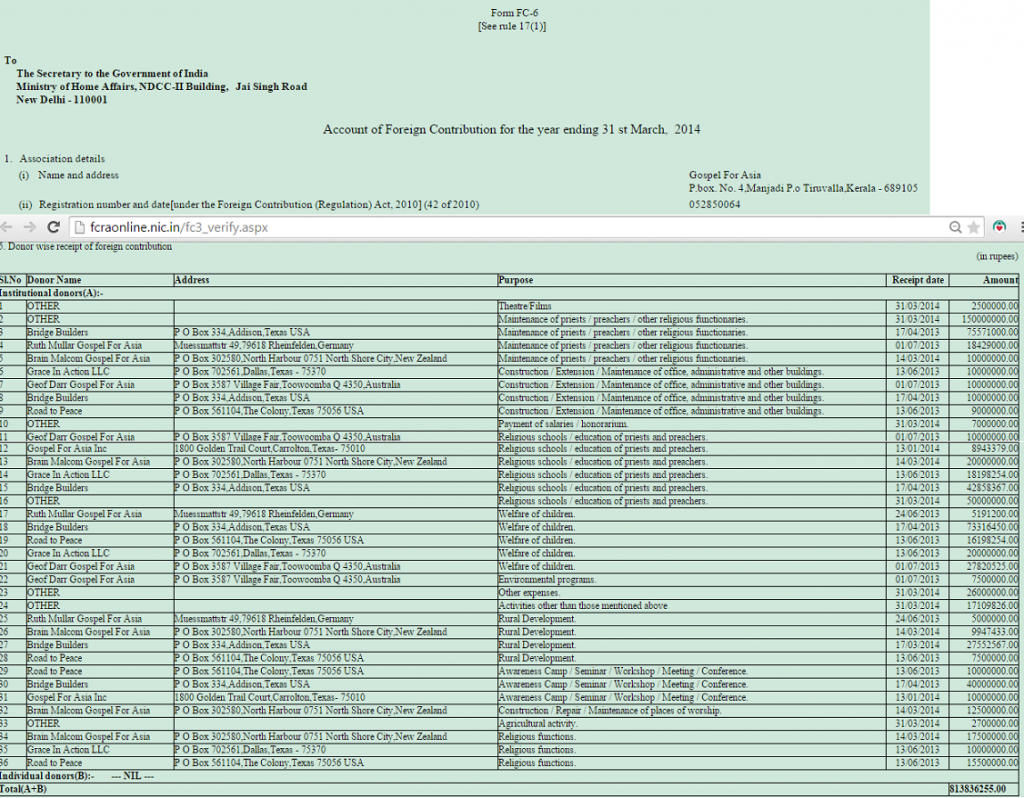 Note that there are donor GFA organizations from Germany, Australia, New Zealand and the USA. Canadian law requires that the funds donated in Canada be spent for the charitable purpose intended by donors. This report in India seems tailor made to comply with that mandate. However, in the part of the form where GFA could account for where Canadian donations were spent, they fail to identify the activities paid for by those funds.

According to COO David Carroll, the $15 million Canadian dollars were lumped in with the United States for accounting reasons. However, no recognition of the funds as having come from Canada shows up. All of the groups listed there are GFA affiliate organizations (e.g., Road to Peace, Grace in Action are LLCs controlled by GFA) so it seems odd that GFA of Canada doesn’t show up. Given the Canadian guidelines, it seems as though the funds coming from Canada should be identified for the very reason David Carroll says they weren’t: “for various accounting reasons.”

The Numbers Don’t Add Up
Note: the figures are in Indian Rupees. As I have pointed out before, the funds the U. S. GFA says they sent to India don’t show up on the Indian reports. The situation is worse if we take into account David Carroll’s claim that the Canadian funds are lumped in with U.S. funds in India. If Canada sent just over $15 million Canadian dollars ($14,183,700 in U.S. dollars on December 31, 2013) to India for calendar year 2013, and the U.S. sent $58,542,900 (from their 2013 U.S. audited financial statement) that adds up to $72,726,600 sent to India from the two countries. However, according to reports of foreign contributions in India, the U.S. GFA is only credited with sending $6 million during 2013. If one adds up all of the funds sent by GFA – US to Indian organizations in FY 2013 (GFA -India, Believers’ Church, Love India Ministries, Last Hour Ministries), we still only get to $37,097,750. The bottom line is that there is a massive difference in what the U.S. and Canada report that they send and what the Indian GFA organizations report to the Indian government.

It is possible that the excess is sitting in an account somewhere and is being reported in some other manner in a way that is not publicly available. I freely admit I am not an accountant and that I don’t know all of the auditing rules which may apply. However, these reports are provided in the U.S., Canada, and India so that an informed person can evaluate whether or not a charity is being accountable with donated funds. Using the reports available, I believe GFA has many questions to address. Where is the money that doesn’t show up on the Indian reports? GFA’s silence does not inspire confidence.