In one of my early communications with Gospel for Asia’s COO David Carroll I asked:

Can you confirm that the reason GFA organizes as an episcopal type church is related to Indian law. I have been told  that Indian law requires GFA to register as a church and assume a governance structure similar to the officially recognized Catholic Church and the United Church of India.  That means an episcopal structure (with bishops, etc.) is required.  Thus KP Yohannan is officially the Metropolitan (archbishop) of the Believers Church.  Is this why allegiance to KP Yohannan and kissing his ring is involved?

In regard to Gospel for Asia’s structure, while we are thoroughly evangelical, our organization and church structure is specific and unique to the areas where we work most heavily. Additionally, K.P. Yohannan’s title is understood in the countries where we work to refer to the senior leader of the organization.  In regard to your question about kissing K.P.’s ring, I haven’t seen it, nor am I aware, that it has ever happened.

On ring kissing, David Carroll needs to see this video:
[youtube]https://youtu.be/rfHoh6xMEkM[/youtube]
The man seated is K.P. Yohannan and the men coming forward are being ordained into the Believers’ Church. They very clearly are kissing Yohannan’s hand, and at times, it seems clear that they are kissing his ring.
The allegations that GFA and Believers’ Church have evolved from an evangelical ministry to a self-contained episcopal type denomination have dogged GFA for about a decade. This video was taken at an ordination service. According to my source, the service took place in 2009 in India at one of the Believers’ Church seminaries.
One former leader in India told me that the pastors were taught several years ago to kiss Yohannan’s ring, which has the Believers’ Church emblem on it. However, many felt awkward with practice and the leaders revised the ritual to include bowing low before Yohannan before he touched a person’s forehead with his signet ring. In any case, these rituals seem to place significant emphasis on allegiance to the Metropolitan.
As recently as April of this year, Yohannan denied remembering it. In a staff meeting, in response to a question about it, Yohannan said:

Did anybody ever kiss my hand or my ring? In memory I cannot ever recall I allowed it to happen or if they did it. Because we never teach it. We never promote it. That is not our doctrine, I am not a god, anything, but if people who talk about it and say this, they saw it, what can I do.

What have I done to you or to anyone here to promote me? When I took the ring on my hand, as God Almighty my witness, I was going to a death chamber. I never asked anyone to kiss my ring, I never allowed it to happen. We never teach it, we never promote it.

The audio is hard to make out but the first quote above is first on the audio followed by the second quote. 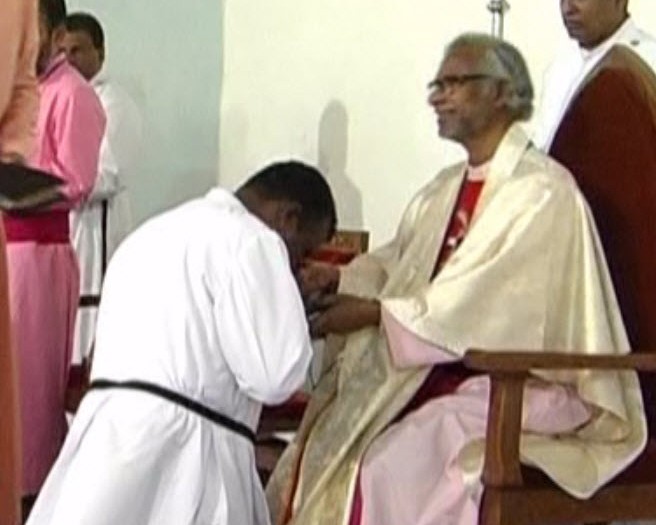 Of course, none of this means that Gospel for Asia is ineffective in ministry to the poor or in service to others. However, the practice of structuring cash transfers to India in ways which evade detection by customs officials and now the double talk on their ecclesiastical practices raises many questions about the organization’s other claims. GFA has asked for and received a significant exception to financial reporting requirements from the Evangelical Council for Financial Accountability. Prominent pastors like Francis Chan claim that GFA’s practices are clean. However, perhaps GFA should respond to these recent concerns with increased transparency rather than silence as they have in the past two weeks.
Share on FacebookShare on Twitter