In a recent staff meeting (May 14, 2015), Gospel for Asia leaders told staff that they had $7 million in cash balance in India. Responding to a question from a staffer about why GFA is sitting on so much cash in India, COO David Carroll answered:

That account will tend to build up over the year, it will ebb and it will flow and it will go down as money is spent. Currently, is there 94 million dollars in there or someone asked is there $150 million dollar fund on the field? No, currently the balances from what I understand from India are around 7 million dollars in that particular, those particular accounts. The reason that they are there is because we have to report all foreign contributions that come in. Money will swell and as we spend the money the money will go. We cannot spend the money until we can spend it on the project for which it was designated.

This puzzled me because it seems to contradict the financial contribution reports filed with the Indian government every year. Something isn’t adding up when one compares Carroll’s information to what is filed with the Indian government.  According to the most recent report showing GFA’s use of foreign contributions for the Indian fiscal year ending March 31, 2014, GFA alone had $54,929,800 listed as a cash balance. If you include the other entities that receive money from U.S. based GFA controlled limited liability corporations, the balance swells to $158,165,400.*

GFA and Believers’ Church both receive money from several LLCs with Texas addresses (e.g., see this list). Two other groups do as well: Last Hour Ministry, and Love India Ministry. The image below shows the cash balances for each of those organizations in India. These numbers do not include U.S. operations, which are likewise substantial.

Carroll is correct that funds designated for a particular purpose cannot be used for another purpose and so if GFA receives a lot of money for something that is not needed on the field, then they have to wait until they need it to spend it. The report filed with the Indian government provides a reasonable amount of detail about where funds have been and are designated to be spent (see the entire report here). See below: 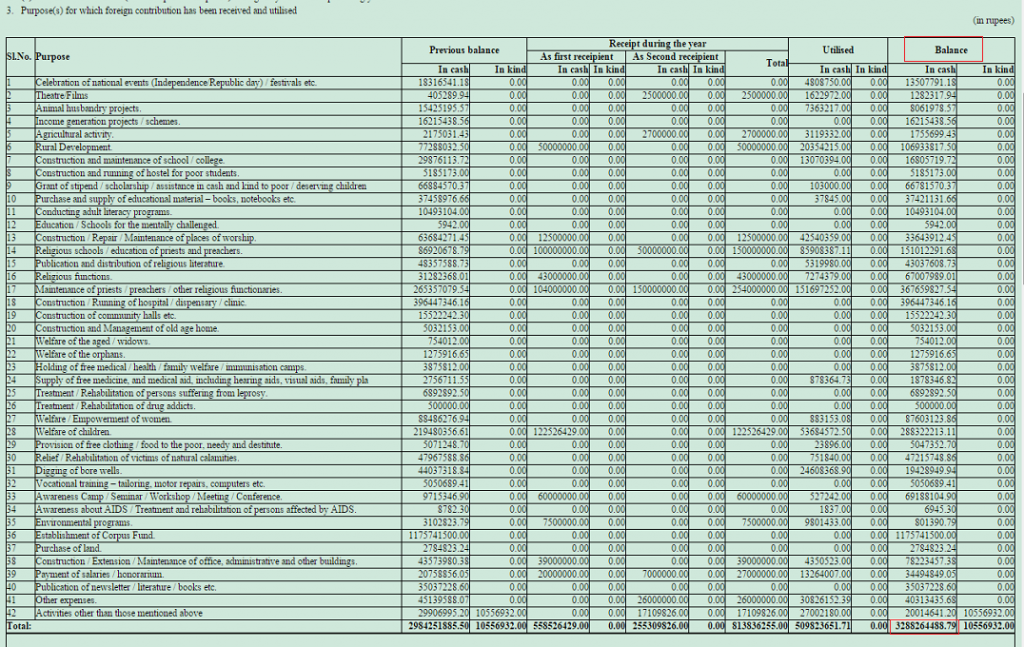 Donors might have a lot of questions after reviewing this information. For instance, what is a Corpus Fund, and why was $21,512,100 sitting in it as of March 31, 2014? It doesn’t appear that any foreign funds were spent on welfare of widows and orphans. There may be perfectly good explanations for all of the questions raised by these reports. However, given GFA’s promises, the massive amounts of money involved, and the other issues identified of late, there is no reason the public and staff shouldn’t ask.

To explore these reports, go to the foreign contributions portal, and then click on the years of interest. All data are not available for 2014-2015 as yet, so click 2013-2014 for the most recent data. Then also click on “Kerala” for the state and hit submit. There you will see all of the charities operating in Kerala. Find Gospel for Asia, Believers’ Church, Love India Ministry, and Last Hour Ministry. Historical exchange rates can be found here.