The Institute on the Constitution is a pro-Confederacy, Christian reconstructionist organization based in Pasadena, MD. Recently, they have promoted clubs in high schools and colleges called American Clubs. IOTC makes the ACs sound like an all-American enterprise but the presentations promote the merger of Christian reconstructionist religious views and civil government. Peroutka teaches that any law not in line with the Bible is not a real law. IOTC also promotes nullification which proposes that states and local jurisdictions can ignore federal laws if officials in the local jurisdictions believe the law to be unconstitutional. They are certainly entitled to their views and apparently these clubs have equal access, but parents should be aware of what the IOTC is bringing to school.
I don’t know how these clubs are being received in schools. There is one in Spanish River High School in FL. And Peroutka recently put pictures on his Facebook page of what he said was a high school in Hudsonville, MI. Other pictures of the same school room had a caption placing the school in nearby Grand Rapids.  While in Michigan, he also visited Calvin College and according to his Facebook page said an American Club had been established. However, according to Calvin College representatives, there is no approved American Club on campus. A group of students heard a talk but there is no officially recognized club at Calvin College.
That fact hasn’t stopped IOTC from using the picture of the Calvin College students as a promotional picture on their website for the American Clubs. See below: 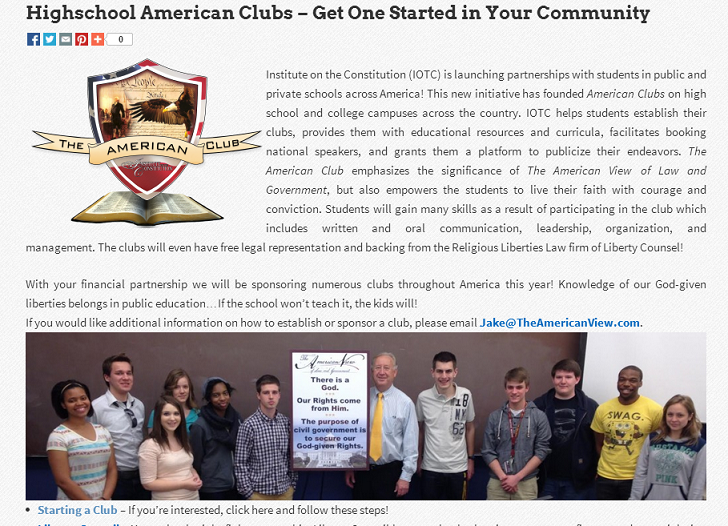 Now compare this picture with the Facebook picture of the Calvin College group. They are the same.
In a way, it is fitting that IOTC is pretending that the Calvin group is a club. IOTC pretends to be a pro-American group when in fact Peroutka is a former board member of the League of the South, a group that advocates for the South to secede from the nation and set up a white Southern homeland. Senior instructor David Whitney at IOTC is the chaplain of the VA/MD branch of IOTC. Peroutka called the Confederate army the real American army in a op-ed on the IOTC website. Articles on the IOTC website justify discrimination and Southern slavery and attack Lincoln. As with the picture, there is a lot of pretending going on.