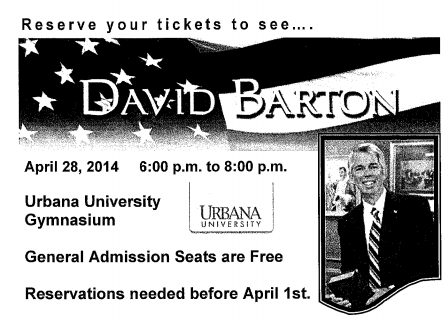 On April 28, David Barton is slated to speak at Urbana University in Ohio. With the title, “David Barton – an expert of historical and Constitutional issues,” the event is promoted on the school’s website. However, his presence there may not place Urbana on Barton’s list of a dozen acceptable colleges.
The Barton event is being sponsored by a small group of people in the area informally called, “We the People,” according to Karen Bailey, Champaign County Auditor. Bailey is one of the initial sponsors who is paying for Barton to come to town. In a phone interview, she called the event “a gift to the community.” She said other sponsors were coming on board but that Urbana University is being paid for the use of facilities.
The event caught my eye because Urbana University seems an unlikely place for Barton to speak. While there is a religious background to the school (Swedenborgian), the school would not be on my short list of institutions which would be friendly to Barton’s brand of historical revisionism.
While he may be a gift to those who want to believe in Christian nationalism, he will be a lump of coal to other groups, such as:
Scholars and academics – Barton says that students at Christian colleges are falling away from faith because of their “pagan professors” who were trained by professors who “hate God.”  Scores of academics, including Christians, have called out Barton on his historical problems.
PTSD sufferers and advocates – Last year, along with Kenneth Copeland, Barton engaged in offensive suggestions about cure to PTSD sufferers.  Barton drew a special rebuke from the conservative Gospel Coalition’s Joe Carter, who called Barton and Copeland’s advice “gospel-destroying and demonic.”
AIDS/HIV patients – Barton has called AIDS/HIV a punishment for sin.
Native Americans – Barton invoked just-war theory to help rationalize the destruction of Native American tribes, prompting Baptist leader Randy Adams to call the theory “outrageous” and unhelpful.
LGBT people – Barton has promoted the idea that homosexuality should be re-criminalized.
Those offended by Christian nationalism – Some, perhaps many, African-Americans are offended by the Christian nationalism promoted by Barton. Then, there was Barton’s awkward defense of Thomas Jefferson’s ownership of slaves and his false contention that Jefferson couldn’t free his slaves during his life.
Those who value historical accuracy – Exhibit A is the removal of Barton’s book The Jefferson Lies from publication in the midst of a successful sales run due to historical errors. Exhibit B is the fact that the Family Research Council removed his Capitol Tour video from You Tube because of historical errors. Focus on the Family had to edit two broadcasts to remove two historical falsehoods which Barton repeatedly told in his speeches. Other instances are too numerous to mention.
Not knowing the topic of his talk, it is hard to know what stories he will tell. He might tell them that violent crime has shot straight up until now since the Bible was removed from the public schools (it hasn’t), or that the first English Bible was printed for the use of schools (it wasn’t), or that the Constitution quotes the Bible verbatim (it doesn’t).