In today’s Politico article on David Barton, reporter Stephanie Simon revealed that Focus on the Family edited their radio broadcasts of a Barton speech entitled, the Founding of America. Surprising to me, not only did they edit the material without issuing a correction but, according to Simon, said they didn’t do it when asked about it. Here is the relevant portion of Simon’s article:

Focus on the Family, meanwhile, edited two videos on its website featuring a lengthy interview Barton gave to Focus radio. The editing deleted a segment in which Barton declares that Congress printed the first English-language Bible in America — and intended it to be used in schools. That’s one of Barton’s signature stories — it’s a highlight in his Capitol tour — but historians who have reviewed the documentation say it’s simply not true. Focus also cut an inaccurate anecdote about a contemporary legal case, which Barton cited to make the point that society today punishes people of faith.
Asked why the videos were edited, Carrie Gordon Earll, a senior director of public policy at Focus on the Family, at first said they had not been, though before-and-after footage can be publicly viewed on websites archiving Focus broadcasts. Earll then said she could not comment beyond a statement noting that Focus “has enjoyed a long and fruitful relationship with David Barton” and respects his “broad base of knowledge” about early American history.

Focus did indeed edit two broadcasts after two dozen evangelical historians approached them about the problems in the programs. Even with the edits there are still problems, but FOTF focused on two particular false stories. The first one was a fractured account of the Commonwealth of PA v. Chambers, and the second was Barton’s embellished version of the Aitken Bible story.
The current broadcast on the FOTF website for June 30, 2011 (begin listening at 13:46) omits the Commonwealth v. Chambers story but the archived version at OnePlace.com has the original version (begin listening at 13:46).  The Aiken Bible story is omitted now from the Focus website on the July 1, 2011 broadcast (begin listening at 9:00) but is in the original version at One Place (begin listening at 8:59).
The transcript of the original broadcasts is available online and contains the sections removed. I wrote about the Commonwealth v. Chambers story here (Barton says the Supreme Court tossed out a murder conviction because a prosecutor used the Bible briefly in court – not true). Barton’s rendition is below: 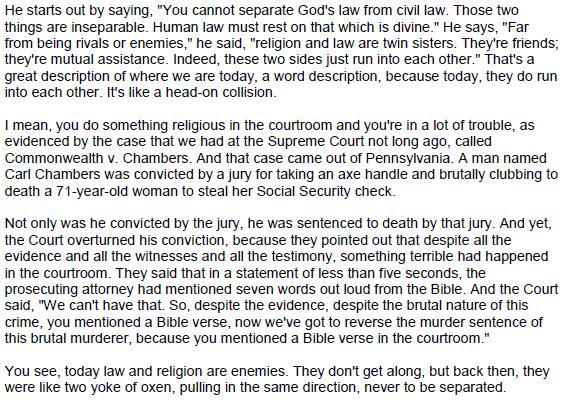 The material about this case has been deleted from the Focus broadcast now on their website.
The second story removed from the program was about the Aitken Bible being printed by Congress for the use of schools. I have addressed this several times, again not true. 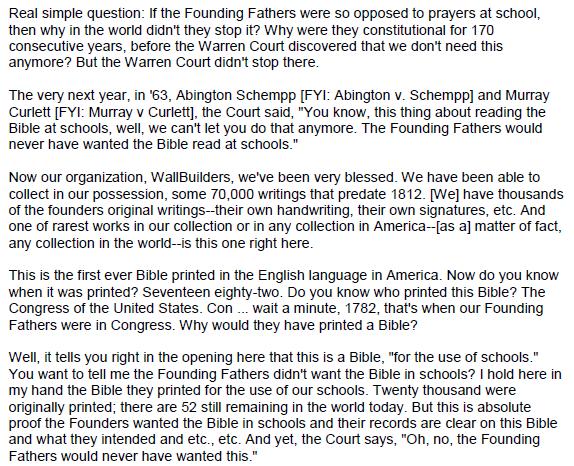 These stories are so far off the facts that apparently someone at Focus believed they should be edited. However, there are other problems with the speech that were not touched.