I’ve addressed this before but it seems worth noting again. David Barton, with a straight face, says the Constitution quotes the Bible. He and Mat Staver discussed this claim on a Liberty Counsel segment recently. Begin watching at 4:30):

In speech to Crossroads Church in OK, Barton listed some of the verses he says are quoted in the Constitution. Take a look: 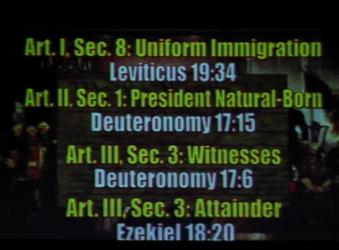 Let’s take one — Leviticus 19:34 — and see if we can find it quoted in the Article 1, Section 8 where Barton says it is. Here is the Leviticus verse:

The foreigner residing among you must be treated as your native-born. Love them as yourself, for you were foreigners in Egypt. I am the LORD your God.

Barton says this verse is quoted in Article 1, Section 8 and specifically references “uniform immigration.” Here is what the Constitution says on this point:

To establish an uniform Rule of Naturalization, and uniform Laws on the subject of Bankruptcies throughout the United States;

The rest of Article 1, Section 8 describes the other powers of Congress, and does not quote from Leviticus.

Let’s take this a little further. What if the Constitution did quote Leviticus 19:34? For discussion’s sake, let pretend that Leviticus 19:34 was rephrased in legal terms in a section I’ll invent as Article IV, Section 5:

The foreigner living among you must be treated as a natural born citizen. Foreigners shall be entitled to all privileges and immunities of citizens in the several States.

If the Constitution included such language, immigrants would have rights they don’t have now and there would no need for immigration reform. Rather, the Constitution invests Congress with the powers to make laws and establish policies (which could do what this verse suggests if the political process leads to that end).

If the Constitution quoted Deuteronomy 17:15, the nation would need to discern somehow who God had chosen to be king. Also, in Deut. 17:20, the Bible notes that the chosen king’s descendants will rule a long time if the king follows God’s instructions. Clearly, our Constitution does not reflect those Bible verses. Furthermore, one does not need the Bible to see the reasonableness of requiring citizenship as a condition of political leadership.

I could go on, but hopefully it is clear that when Barton claims the Constitution quotes Bible verses, he must be referring to some other Constitution.