Kenneth Copeland’s and David Barton’s teaching on post-traumatic stress disorder struck a raw nerve.
On Veteran’s Day, Copeland and Barton claimed that the Old Testament book of Numbers 32 is a promise that soldiers who fight for God are promised that they will return from battle and can get rid of PTSD if they cast out demonic influences. Reaction was swift and negative. Predictably, left leaning groups castigated the two. However, equally strong was the reaction from evangelical and conservative circles. These groups have good reason to react negatively, the advice given by Barton and Copeland was dangerously misinformed.
I rarely treat PTSD these days. However, when I owned a group practice in Southern Ohio, I had a contract with the Veteran’s Administration to treat Vietnam Vets with PTSD. Before he died, my uncle struggled with his experiences in WWII, often using alcohol to quiet the raging memories inside. The intrusive thoughts and sense of dread are quite real to the person who suffers. Advances in brain imaging have begun to reveal some answers to why some people experience symptoms after trauma and others do not. And Numbers 32 has no role in the differences.
A recent VA study found that the parts of the brain which encode incoming information remain active in PTSD patients whereas non-sufferers show more neural flexibility. Study co-author Lisa James said, “The deficit that we see in PTSD is the absence of that ability to modulate.”
Acting along with pre-existing vulnerability, trauma seems to actually erode the resilience and mood regulating functions of the brain. A 2011 NIMH funded study found fewer neurons responsible for passing chemical messages through the brain in victims of trauma than in brains of controls participants. The brain scans below depicts the difference: 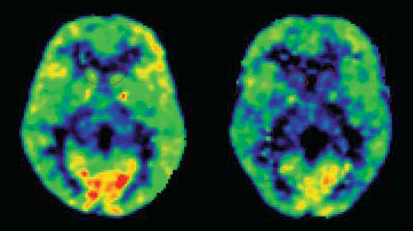 A quick review of the other NIMH work and many other studies showing real changes as the result of trauma demonstrate the harmful nature of the advice given by Copeland and Barton.  One cannot just “get rid of it” as Copeland counseled.
Copeland and Barton should immediately offer an apology and point people to the VA and/or other credible medical and psychological professionals.