In this The Times of Israel op-ed, attorney Marc Stanley has taken note of Donald Trump’s assessment of Jews who support the Democratic party and at first seems to strike a penitent note.

With the High Holy Days around the corner, I just can’t wait for Yom Kippur to begin atoning. As you recently proclaimed, Jews who vote Democratic are “disloyal.” Well, I hope you will find a way to forgive me, for I have been disloyal—very disloyal.

Then Stanley lists the many ways he has “misunderstood” the president. If only he understood Dear Great Leader Trump’s special ways of showing respect to Jews, then maybe he wouldn’t be so “disloyal.”

In the op-ed, Stanley reminds readers that most American Jews are just as “disloyal” as he is which should give the president some reason to worry about his current strategy.

Obviously, Gospel for Asia founder and CEO K.P. Yohannan wants people to believe he doesn’t sit on any boards of Believers’ Eastern Church in India.  Even though he is the Metropolitan Bishop of the church, he told his own staff and the Evangelical Council for Financial Accountability that he wasn’t in authority. Now I have found a financial statement filed in the UK where he claims he isn’t on BEC’s board (see note 10). See below:

10 TRANSACTIONS WITH DIRECTORS/TRUSTEES AND RELATED PARTIES
During the period, none of the Trustees of GFA World received emuneration from the Charity (2015 anil).

I have demonstrated repeatedly that Yohannan is referred to as the head trustee, the final authority, and the one who inaugurates the Bishop’s Council in church documents. The church Constitution makes this extremely clear: 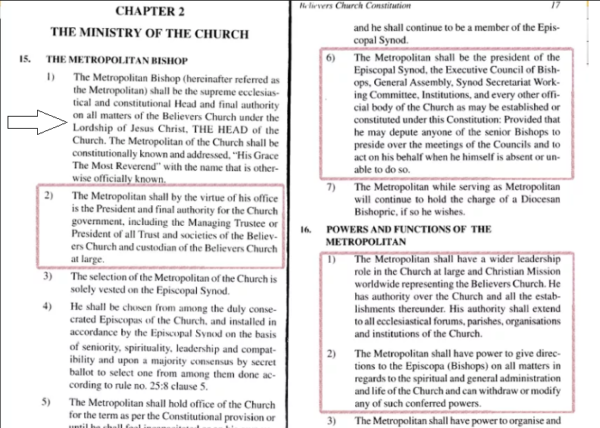 In a February hearing, an email from former Gospel for Asia COO David Carroll to Yohannan was quoted by attorney Marc Stanley. Atty Stanley represents Garland and Phyllis Murphy who are suing GFA and various officers of the organization alleging fraud and misuse of funds. In this citation, Carroll reminds Yohannan that they have told the public Yohannan has nothing to do with finances and is only the spiritual head but implies such a representation isn’t true.

We can say all we want that we don’t have anything to do with the Believers Church or the field and that you are only the spiritual head of the church and that finances are handled by others but you, but as a practical
matter, that will not hold up.

To the charity commission of the UK, GFA World with K.P. Yohannan sitting on the board, again claimed something that is contradicted by the organization’s founding trust documents, the church’s constitution, and many court documents in India. More recently, we have this statement from a former COO.

Perhaps, there is an explanation. The burden is on GFA and Rev. Yohannan to offer it.