In a blog post yesterday, Gold Creek Community Church pastor Dan Kellogg said he did his homework before asking Mark Driscoll to speak at his church on Sunday. According to that blog entry, Kellogg said he spoke with Driscoll’s “accountability board.”  The unnamed member or members of that board said: “There is nothing Mark has done that disqualifies him from ministry”.
That was enough for Kellogg, but was it enough homework? Kellogg reminds me of the student who attacks a complex subject by looking it up on Wikipedia.
Kellogg’s reference to Mars Hill Church Board of Advisors and Accountability brings to mind the unfinished business of Mars Hill. If Kellogg wanted to do some homework, he should have read what one former BoAA member, Paul Tripp told then current elders of Mars Hill Church: “This is without a doubt, the most abusive, coercive ministry culture I’ve ever been involved with.”
Kellogg could have read the letter from the 21 elders who brought charges and the letter from nine additional elders who wanted Driscoll to enter a restoration process. Then he could have heard from the elders who actually investigated the charges (the BoAA did not do the investigation but delegated it) who said Driscoll resigned instead of entering an elder directed restoration process.
Then he could have read the report from the elders who investigated the charges. Oh wait. No, he can’t because the members of that group never released the report. Although they publicly disagreed with the BoAA’s description of their investigation, they never released a report of their findings. However, those elders did agree about this:

The investigation of formal charges against Mark Driscoll has revealed patterns of persistent sin in the three areas disclosed in the previous letter by the Board of Overseers. In I Tim 5:20, it requires that an elder be rebuked for persistent sin. Our intention was to do this while providing a plan for his eventual restoration to leadership. The Board of Elders in agreement with the Board of Overseers are grieved, deeply grieved, that any process like that was lost to us when Mark Driscoll resigned in position and left the church.

Some of the investigation team are still around Seattle pastoring at various Mars Hill legacy churches. You can find a list of them here.
After reviewing the available primary sources, Kellogg could have looked at an analysis of the four narratives of Mark Driscoll’s resignation/release from ministry examined by Wenatchee the Hatchet. Perhaps he could have called up Paul Petry or read what Steve Tompkins wrote after he left Mars Hill.  Kellogg could have checked out the Repentant Pastor website where former Mars Hill pastors recount their experiences and remorse. He could have read an exit interview from a former staffer which likened Mars Hill to a place where Driscoll wielded total control.
Instead he used just one source.
There is little doubt that evangelicals in Seattle have been divided over Mars Hill’s demise and legacy. I suspect the situation is worse now than before Sunday. 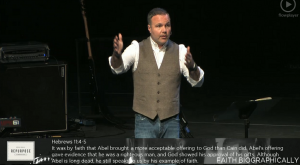 UPDATE: Gold Creek put the sermon up on their website.
Mark Driscoll is speaking at Gold Creek Community Church (the live feed freezes often but you can catch some of it here) while a demonstration is taking place outside.
He is speaking about Hebrews 11.
Outside former Mars Hill members are giving out a flyer about their actions (click the link to read it).
Incredibly, Dan Kellogg, the pastor at Gold Creek said Driscoll had been treated unfairly by his staff and that most what was said in the media was gossip. Watch:

You can listen to the entire message below:
[youtube]https://youtu.be/op-a6KGGjRo[/youtube]
Unbelievably, Rev. Kellogg interrupts his salvation call to speak down to those present who had reservations about Driscoll’s return to the pulpit in Seattle, saying:

If you are one of those people who is not excited about him being here and you want to tell him that, I encourage you to go across the street and join those folks over there. That’s their opportunity to do that and it’s awesome, it’s great, today we’re just going to be positive. 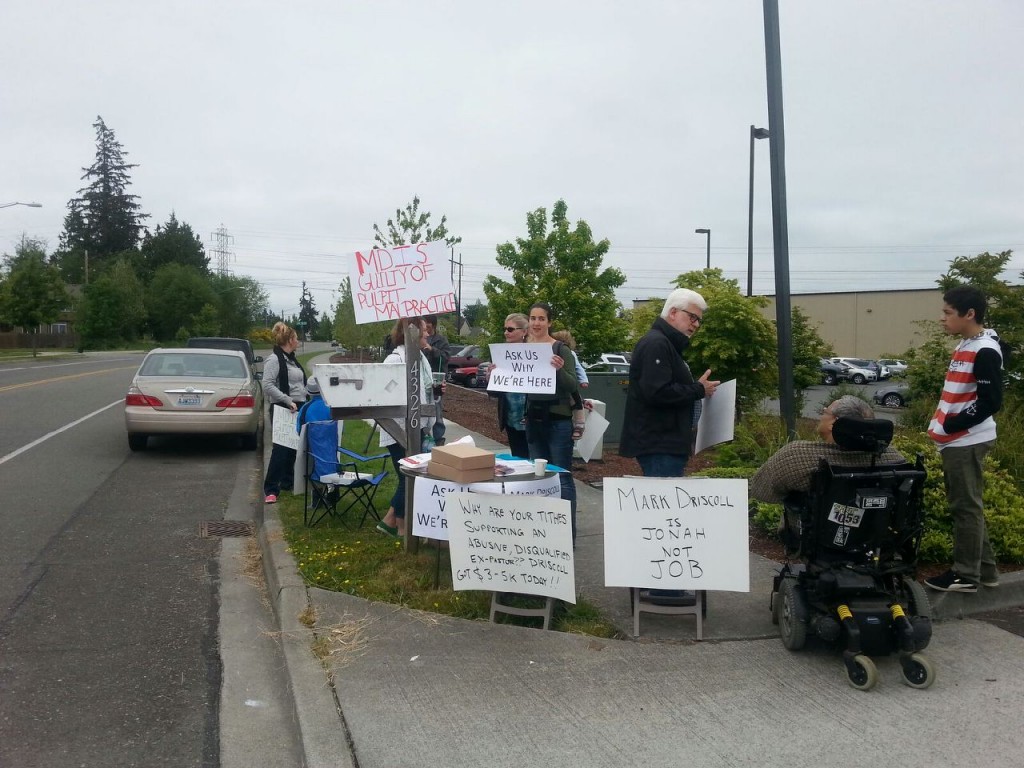 Kellogg’s stance is amazing. His ignorance or disregard of the what the Mars Hill elders did is a slap in their faces; I mean all of them, the ones who left and filed charges, as well as the one’s who stayed and investigated those charges.  He expands on his views in a blog post. Kellogg writes:

Very soon he will move and begin again in another city. He has learned some valuable lessons. He is a changed man.

According to my sources, Phoenix is the new city. According to Kellogg, it is all good. Seems to me one sign of change would be to go back to the people who have sought justice and reconciliation before you go. Kellogg also says he spoke to Mars Hill’s accountability board and they said he was fine.

Today we will have Mark Driscoll speak for us. I have done my homework. He is a controversial speaker but after talking with his accountability board they said: “There is nothing Mark has done that disqualifies him from ministry”.

One wonders if the report that recommended a restoration plan will now see the light of day. So far one prominent message of the Driscoll comeback is how his church wronged him. The former elders certainly told a different tale last year. This now places the unfinished business of last year back in the spotlight. The BoAA said Driscoll was not disqualified but the elders who actually investigated Driscoll said he needed restored.

Thursday evening I posted a notice that Mark Driscoll is slated to be the mystery speaker tomorrow at Gold Creek Community Church in Mill Creek WA. Driscoll’s return to the Seattle preaching stage will not go unnoticed by some former members of his former church. See below:

For Immediate Release
Public Demonstration Protesting Mark Driscoll in the Pulpit
Mill Creek, Washington, May 17, 2015
Gold Creek Community Church in Mill Creek, Washington has invited Mark Driscoll to preach in all three services this Sunday. There will be a public demonstration to protest putting the unrepentant former pastor back in the pulpit.
If you want to support this protest, please join us in front of the church at 4326 148th St SE, Mill Creek, WA 98012 at 9:45am, on Sunday, May 17. This will enable the people leaving the 9:00 service and those arriving at the 10:30 service to see the protest. If you can stay until after 12:00, those arriving for the noon service will also see it. Some of us will arrive earlier and leave later if you are willing and able to extend your time there. (Note: Your GPS might think that address is in Bothell. That should still get you there.)
Feel free to bring your own signs. Please keep them simple and straightforward. Include statements that would be meaningful to that local congregation, such as “When will the abuse stop?” or “UNFIT FOR ANY PULPIT!”
Please park at the back of the small shopping area a couple of blocks west of the church. It is at the corner of Seattle Hill Road and 148th. During the demonstration, please remember to stay off of church property and off the street. Please don’t block traffic or pedestrians. We want to be pleasant while there and clean up after ourselves when we leave.

Driscoll resigned from Mars Hill Church in October 2014 rather than enter a process of restoration mandated by the then current elders of the church. Recently he has become more active, speaking recently at a church in California.
For related posts click here. 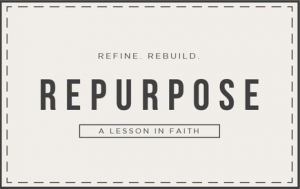 According to sources in the know, this Sunday Mark Driscoll will speak at all three services at the Mill Creek campus of Gold Creek Community Church on RePurpose.
Last Sunday, a public announcement was made about a guest speaker who has been called one of the top 25 most popular preachers. The pastor also negatively referred to “sour milk” Christians as those who might not want to see Mr. Popular in the pulpit.
I called the church to ask for confirmation and was told the church is not revealing who the guest speaker is.
Then pastor Larry Ehoff told me in an email:

We are having a guest speaker at all of our services. That is as much as I can say at this point. We would love to have you join us.