Just a little while ago, an update appeared on the GoFundMe page designed to raise money for a lawsuit against Mars Hill Church.

This campaign has ended. You can still help by clicking on the following link:http://www.gofundme.com/MarsHillLawsuitThanks to all who participated.Rob Smith

It is time for Christians everywhere to stand up and say, “Enough!! We will no longer put up with pastors who reach for honor for themselves and who enrich themselves at the expense and harm of those they claim to be shepherding!” When leaders in the Church choose to stay silent, others must speak up. Paul’s mandate to Timothy regarding leaders who persist in certain sins (1 Timothy 5:19-20) must not be ignored by the Church. Most of those who were leaders at Mars Hill Church have chosen to remain silent.Please help us discover and make clear the truth about what happened at Mars Hill Church by contributing to this fund for a RICO lawsuit against the former top leaders of Mars Hill.

The funds already raised have gone to the attorney who did preliminary work on the suit. Brian Fahling constructed the RICO action and presented the requests for mediation to the church.
The president of Mars Hill Church is now Kerry Dodd. Dodd has not replied to requests for comment regarding the church.
Information about the lawsuit can be found at https://www.wthrockmorton.com/2014/12/26/letter-the-legal-case-against-mars-hill-church/.

I have obtained a letter from attorney Brian Fahling to Karen Cobb, attorney for Mars Hill Church. Fahling represents several plaintiffs who allege various offenses, some of which are public claims covered by federal racketeering statutes. The letter, dated December 24, specifies the legal case against Mars Hill. The plaintiffs would like to mediate but Mars Hill Church leaders (not sure who all that includes right now) have not agreed, according to the letter. 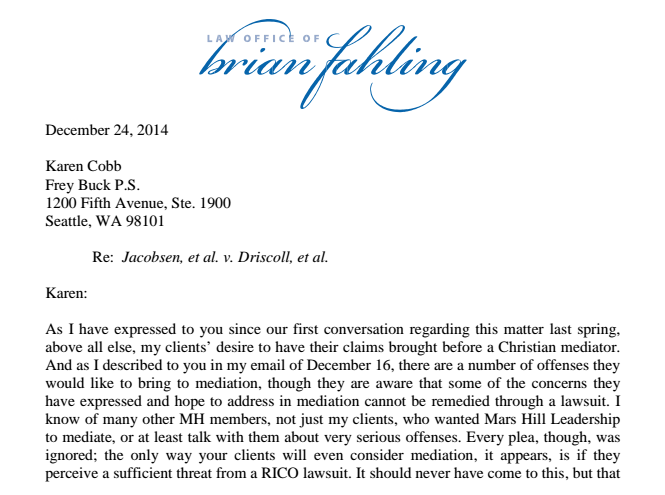 For this post, I am simply going to post a link to the letter and then add commentary afterwards as I am able.  I will note that there is Global Fund time line in this letter that is intriguing and that I am going to spend some time reviewing. A legal fund to support mediation or a lawsuit has been established.
For Fahling’s letter, click this link.

According to former Mars Hill deacon Rob Smith and Seattle attorney Brian Fahling, a lawsuit is being prepared with Mark Driscoll, Sutton Turner, David Bruskas, and Jamie Munson named as defendants. The suit may not be filed until later this week or early next week. Those bringing the suit have alerted Mars Hill Church leaders and hope to engage in talks which could serve to prevent the suit from going forward.
A civil RICO claim (see link for statutory basis of a Racketeer Influenced and Corrupt Organizations suit) must allege an injury to the plaintiffs. In this case, plaintiffs donated funds for specific purposes based on church leaders’ representations. The funds were then diverted to other purposes. In addition, plaintiffs believe that funds from the general fund were used fraudulently to scam the New York Times best-seller list for Mark Driscoll’s self-inurement.
As has been documented here, Mars Hill leaders solicited donations for various specific purposes (e.g., Jesus Festival, international misions). However, those funds were often used for other purposes (e.g., establishing Mars Hill video locations) via Mars Hill Church. The suit will allege a pattern of activities occurring over at least four years. The Evangelical Council for Financial Accountability may also be named in a separate action.
Smith, who has raised numerous concerns about Mars Hill, recorded a You Tube video to promote a legal fund for the suit. The rationale is provided on the fundraising site:

Mars Hill Church, according to Paul Tripp who recently served on their Board of Advisors and Accountability, “is without a doubt the most abusive, coercive ministry culture” he has ever been involved with.
Because of the abuse of both people and money, it is essential that the dissolution of the church be delayed until the abuse can be clearly articulated by the church leadership, and repentance and restitution be made.
At this point, only a just legal action will stop the dissolution of the church. A legal team has been hired and the delay of the dissolution will be sought so that true repentance and restitution can occur.
Please support this effort.
As this year has unfolded, we have seen the widespread abuse of people, and of money.
Mark Driscoll, who built his image calling men to take personal responsibility for their actions, rather than take responsibility himself for his part in the abusive culture, resigned and left the church. He failed to address the abuse that Paul Tripp spoke of. He failed to address the hundreds of shunned and abused members, ex-members and donors.
The remaining leadership, rather than dealing head-on with the abuse, has continued to make decisions behind closed doors and simply ignored the multiple requests of members, ex-members and donors to deal with the abuse.
Rather than be transparent about the misuse of the finances of Mars Hill and the widespread abuse of people, they have chosen to hastily dissolve the corporation, and is promising whatever cash is left over to the individual campuses of Mars Hill Church.
The lead pastors of each of these campuses, rather than raising their voices for transparency and closure for the hurting ex-members, many of whom were under their care, are saying nothing. The word in the street is that they will lose their part of the “spoils” if they rock the boat. So they appear to have no interest in bringing healing to the members that their campus has harmed, or to the hurting members and ex-members from other campuses.
These “pastors” are not even calling for the public shunning of Paul Petry to be lifted. This is continued cruelty that has lasted over 7 years. Paul Petry represents many other members and families that were wrongly disciplined or ex-communicated.
At this stage of the game, without legal action being taken, Mars Hill Church will dissolve and the assets, including money, will be distributed in back-room deals that members and donors are excluded from. The many members, ex-members and donors who feel defrauded and abused will not see a just resolution to their wounds.
It is in the interest of transparency and healing that the dissolution be stopped. It will prove to be the righteous course of action. It will allow leadership that has particpated in the shocking level of abuse to clear their consciences, speak the truth, do the right thing, and be forgiven.
It will be a wonderful testimony to all. To simply dissolve will permanently harm all who are seeking healing and closure.
Please support this fund.

From my vantage point, it would be to the advantage of Ethiopian and Indian pastors if the dissolution of the church could be stalled to allow Mars Hill more time to disclose how much money should go to them. The Global Fund brought in millions and an investigation would help clarify how much money should be funneled to those who were used to raise the funds which ultimately were used to support Mars Hill’s expansion.

The plot thickens.
Yesterday, World Magazine reported that 16 former Mars Hill members hired an attorney to send a letter to Mars Hill Church demanding that the church stop the implementation of the new email deletion policy. The attorney, Brian Fahling, requested that Mars Hill preserve the stored data in anticipation of litigation. As I first reported here on Wednesday, the policy was set to take effect yesterday. 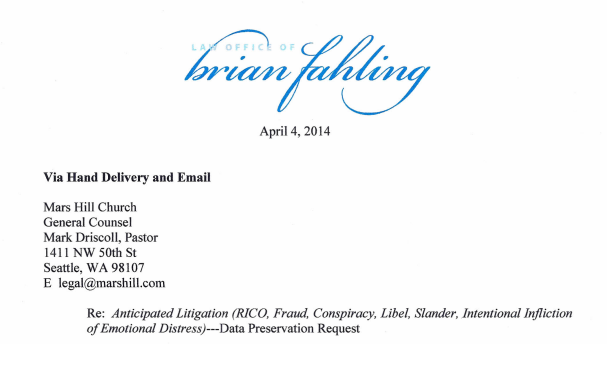 I have obtained a copy of that letter which you can review here.
Fahling claims Mars Hill faces penalties if they destroy evidence which could be at issue in litigation.  He presses the case that possible evidence includes electronic communications and documents. According to World’s Warren Smith, Mars Hill did not reply to a request for comment.
While email retention policies are becoming more common in business and industry, this notice could complicate matters for the megachurch. Assuming the leaders became aware of this intention to request electronic information before the close of business, there may be repercussions if they followed the policy as planned.