In all my coverage of the Mars Hill Church Global Fund, two questions have not been fully answered: What was the purpose of the Global Fund? and How much was spent on missions from the money donated to the Global Fund? I have recently obtained a Mars Hill memo that addresses those questions. Although complete answers are not provided, an examination of this memo allows some insight into how the Global Fund functioned at Mars Hill. Apparently, at least during some of the time when the Global Fund was an option for member giving, church leaders used the Fund to offset accusations that Mars Hill Church did not sponsor international missions. Even though very little was planned for missions, the branding of Mars Hill Global was used to burnish the church’s reputation.
The purpose statement in the November 2011 memo below is almost identical to another November 2011 memo I posted in early May of this year which signaled a change of focus for Mars Hill Global. Previously, Mars Hill Global supported Acts 29, The Resurgence and Mars Hill church planting. However, in November 2011, Mars Hill Global was transitioned into a platform for international outreach. In this way, Mars Hill Church could wake the giving potential of a “sleeping giant” of donors around the world (e.g., visitors to the website and people who listened to Mark Driscoll’s sermons via podcast). The memo below discusses the Global Fund and how donations to it would be used. In that sense, this memo is a companion to the one I obtained in May.
From mid-2012 to May 2014, Mars Hill Global emerged as Mars Hill Church’s international mission outreach with concentrated efforts in Ethiopia and India. I have contended that the marketing created the perception that donations would be spent in those countries. Earlier this year, Mars Hill Church admitted that confusion existed and agreed to spend donations on international missions if Global donors contacted the church with that specific request. The memo below suggests that there was a plan to brand Global as an international outreach but spend most of the money elsewhere. 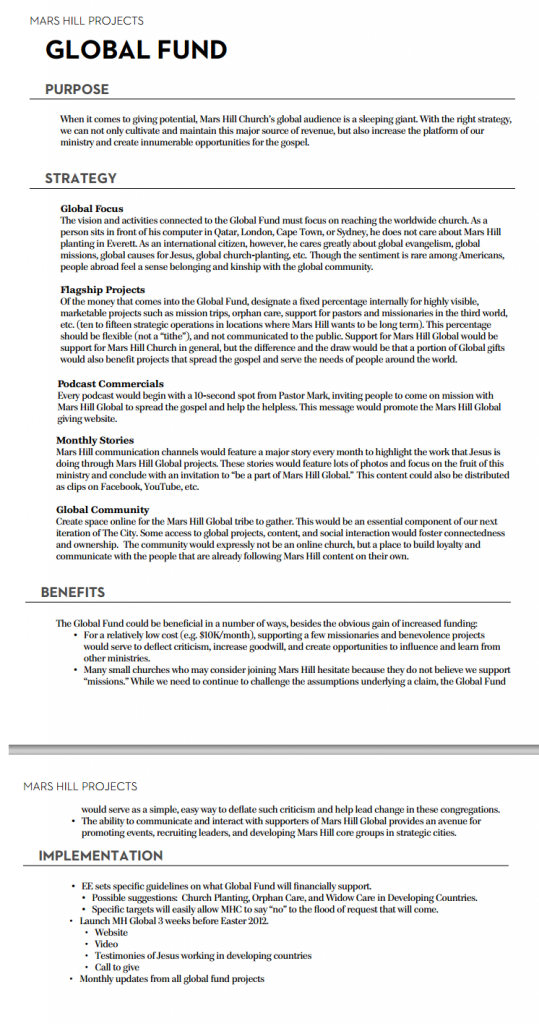 There are several portions of the memo I want to highlight.

Global Focus
The vision and activities connected to the Global Fund must focus on reaching the worldwide church. As a person sits in front of his computer in Qatar, London, Cape Town, or Sydney, he does not care about Mars Hill planting in Everett. As an international citizen, however, he cares greatly about global evangelism, global missions, global causes for Jesus, global church-planting, etc. Though the sentiment is rare among Americans, people abroad feel a sense belonging and kinship with the global community.

This statement appears to vindicate the perception that the church was aware that global donors wanted to support global projects. However, “the preponderance” of the funds (to quote the Mars Hill Global FAQs) went to Mars Hill Church locations in the U.S. In fact, some of those donations went to Everett.

Flagship Projects
Of the money that comes into the Global Fund, designate a fixed percentage internally for highly visible, marketable projects such as mission trips, orphan care, support for pastors and missionaries in the third world, etc. (ten to fifteen strategic operations in locations where Mars Hill wants to be long term). This percentage should be flexible (not a “tithe”), and not communicated to the public. Support for Mars Hill Global would be support for Mars Hill Church in general, but the difference and the draw would be that a portion of Global gifts would also benefit projects that spread the gospel and serve the needs of people around the world.

It appears that Mars Hill leaders planned to market Mars Hill Global as a mission outreach as a means of raising money for other projects. However, the plan did not include public disclosure of how much money would actually be spent on “highly visible, marketable projects.” We get a little insight into this later in the memo. Two examples of those “highly visible” projects include the Amharic Bibles donated to church planters in Ethiopia and the Ethiopian pastors’ conference in August 2013.

Podcast Commercials
Every podcast would begin with a 10-second spot from Pastor Mark, inviting people to come on mission with Mars Hill Global to spread the gospel and help the helpless. This message would promote the Mars Hill Global giving website.

Eventually, these commercials featured Sutton Turner in Ethiopia at the beginning of the sermons and a narrated commercial at the end of the sermon video (e.g., this sermon: watch the first 1:49 and then the last 22 seconds of the sermon). Mars Hill Church has much content on their Global site and You Tube where Indian and Ethiopian people are shown as recipients of Global funds. However, we now know that very little of the money donated was sent to “help the helpless.”
Under the heading of “Benefits,” the memo outlined how “the helpless” could help Mars Hill Church:

The Global Fund could be beneficial in a number of ways, besides the obvious gain of increased funding:
• For a relatively low cost (e.g. $10K/month), supporting a few missionaries and benevolence projects would serve to deflect criticism, increase goodwill, and create opportunities to influence and learn from other ministries.
• Many small churches who may consider joining Mars Hill hesitate because they do not believe we support “missions.” While we need to continue to challenge the assumptions underlying a claim, the Global Fund would serve as a simple, easy way to deflate such criticism and help lead change in these congregations.
• The ability to communicate and interact with supporters of Mars Hill Global provides an avenue for promoting events, recruiting leaders, and developing Mars Hill core groups in strategic cities.

This cost-benefit analysis strikes me as an illustration of exploiting the helpless rather than helping them. Look at the benefits to the church; for a low cost (about $12o,000/year), the church can look like they strongly (“highly visible”) support international missions. The leaders hoped to deflect criticism that Mars Hill did not support missions, even though the amount actually envisioned for international projects was trivial compared to the amount raised (over $2 million in FY 2013).
As we now know, most Global Fund money went to support Mars Hill expansion — which was the plan all along — without any plans to tell donors how their funds were being spent.
I contend that Mars Hill Church owes the public an explanation and Ethiopian and Indian church planters a lot of money.