Subtitle: “Mars Hill Global Cultivates the Giving Base.”
Like businesses and other organizations, megachurches like to brand things. They brand pastors (Mark Driscoll: “I am the brand!”), and brand ministries. Probably nothing really wrong with that if the brand accurately represents what is being done and offered. For Mars Hill Church, Mars Hill Global is a phrase that describes the Christian market outside of Seattle. According to the MHG web presence, Mars Hill has things going on in Ethiopia, India, and online which is everywhere else.
In addition to whatever else it is, MHG appears to be a source of funding for Mars Hill Church. In November 2011, Mars Hill Executive Pastor Sutton Turner sent a document to the Media and Communications Team touting Mars Hill Global as a way to cultivate the international “giving base.” The document is here: 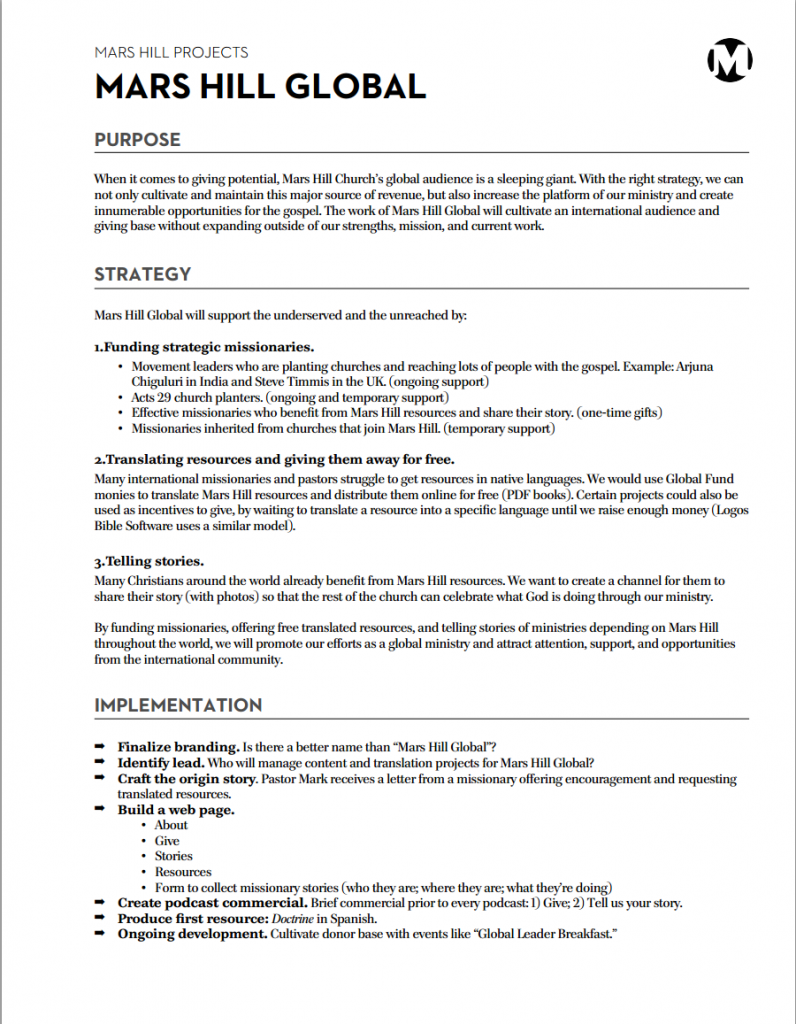 Note the prime purpose for MHG is to cultivate donations to Mars Hill. The strategy involves what appears to be a lot of good things, but it is hard to escape the impression that the end game is an increase in revenue.
Mars Hill Global existed prior to this memo. However, this memo promoted a new strategy. As a part of that strategy, the Media and Communications team is urged to “Craft the Origin Story.” Everybody likes a good origin story. Perhaps Mark Driscoll really did receive letters requesting resources. But maybe he didn’t. It is hard to tell. I can’t tell from the current website what story was originally crafted.
Currently, MHG takes in about $300,000 monthly. This is a dramatic increase from when this memo was sent. Apparently, the sleeping giant is awake.