Yesterday, I posted a Mars Hill Church document about the rebranding of Mars Hill Global as a revenue source. The document was sent out by MH Pastor Sutton Turner in 2011 to the Media and Communications Teams and began:

When it comes to giving potential, Mars Hill Church’s global audience is a sleeping giant.

Since 2011, the giant has indeed ceased from slumber. At a recent Mars Hill vision breakfast meeting, this slide was presented to the congregation: 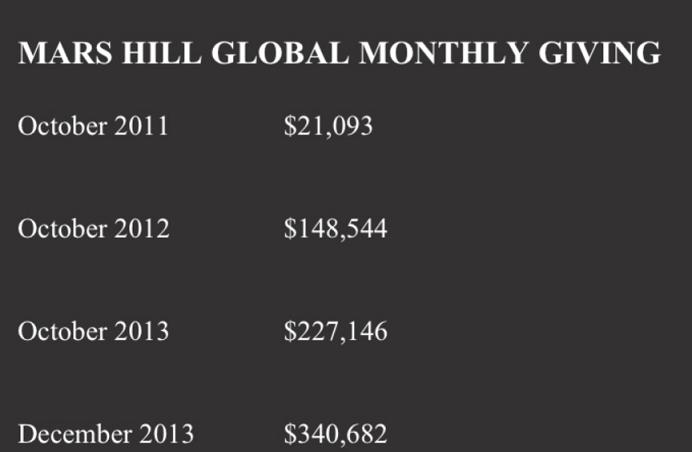 These numbers are increasing rapidly while overall giving has been flat, and according to sources in Mars Hill, declining in recent months.  In fact, the situation is troubling enough that sources tell me that the church will be approaching an entity known internally as “The Lucas Group” to help raise money. In addition, I have heard from several former staff members that the amount of Mars Hill Global money disbursed on behalf of missions outside of the United States is very low, less than 5%.
According to these sources, the rest of the funds are pooled in the general fund which is used to support administration of the  Mars Hill franchises. Consistent with that claim is the fact that MHG website lists the United States as a target of Mars Hill Global. All the franchises are listed, including the churches surrounding Seattle. Reviewing the April Mars Hill Global newsletter, it looks like global is local with most of the material being about the U.S. churches.
In 2011, Sutton Turner asked if there was a better name than Mars Hill Global for the cultivation of the international giving base. I think the better name would be Mars Hill Church.