Eric Metaxas lives in a curious space among those who admire and study German pastor and martyr Dietrich Bonhoeffer. In one universe dominated by evangelicals outside of academia, Metaxas is viewed as a Bonhoeffer scholar. In another dominated by academics and Bonhoeffer scholars, he is considered to be a Bonhoeffer revisionist, someone who has hijacked Bonhoeffer perhaps for partisan religious purposes.
Yesterday on his radio show, Metaxas took aim at the latter group. His guest on the program was Hillsdale College president Larry Arnn. Arnn, a Winston Churchill scholar, told Metaxas about a recent talk at Hillsdale by the widow of Churchill biographer Sir Martin Gilbert. In the course of the discussion with Mrs. Gilbert, the subject of Bonhoeffer came up. Arnn said all of the information about Bonhoeffer in the room came from Metaxas’ Bonhoeffer bio. Listen (at about 3:15 in the podcast):

Transcript:
There are a number of liberal critics of my book. I keep seeing stuff on the Internet and they’re very vicious and they act as though I threw something together over a weekend to suit my view of the world, you know, wrapped in the life of Bonhoeffer and I just want to use this opportunity, since I am not typically talking about my book on Bonhoeffer. Anybody who is a historian on any level whether professionally, academically, or more as an amateur as I am, you know you want to take facts very seriously. And I do want to say that there’s not a syllable in my Bonhoeffer book that isn’t true and I think that people who don’t like how Bonhoeffer comes out in my book, that’s really something that reveals where they’re coming from more than where Bonhoeffer or I are coming from because his is such a well documented life.

Taking a page from David Barton, Metaxas reduces his critical reviewers to liberals when in fact at least some of the critical “stuff” is coming from conservative evangelicals. For instance, one of the more scathing reviews of Metaxas’ book was written by Richard Weikart, an evangelical professor who is also a senior fellow with the Discovery Institute. The Discovery Institute promotes intelligent design and is anything but a haven for liberals. Here is what Weikart says about accuracy in Metaxas’ book:

Let’s start with the historical problems. Metaxas read enough about Bonhoeffer’s life to get many facts right about the events of Bonhoeffer’s life. This is the strongest part of the biography. Even here, however, there are some major problems. For instance, Metaxas mistakenly claims, “From the beginning of his time until the end, Bonhoeffer maintained the daily discipline of scriptural meditation and prayer he had been practicing for more than a decade. . . . Once he got his Bible back he read it for hours each day.” (p. 438) This portrait will certainly make Bonhoeffer popular among serious evangelicals, but unfortunately this image is false. In 1944 Bonhoeffer wrote to his friend Eberhard Bethge, “Once again I’m having weeks when I don’t read the Bible much.” Bonhoeffer had told Bethge the same thing twice before in 1941 and 1942. [4]
Metaxas also does not have a solid grasp on Bonhoeffer’s historical context. It is hard to give much credence to someone writing about German history who thinks that Bonn is in Switzerland or that Hitler was democratically elected into office or that Germany was not yet a police state in August 1934. Metaxas also claims that the Barmen Declaration, which was the doctrinal statement of the Confessing Church, rejected anti-Semitism. In reality, the Barmen Declaration does not mention anti-Semitism at all, and many scholars have criticized it for this.

Remember Weikart is not a liberal.
To fact check the claim about the Barmen Declaration, all one has to do is read the declaration (source) and compare it to what Metaxas wrote about it in the Bonhoeffer bio on page 222.

On the last three days of May 1934, the leaders of the Pastors’ Emergency League held a synod in Barmen. It was there, on the Wupper River, that they wrote the famous Barmen Declaration, from which emerged what came to be known as the Confessing Church.
The purpose of the Barmen Declaration was to state what the German church had always believed, to ground it in the Scriptures, and to differentiate it from the bastardized theology that had been coming from the German Christians. It made clear that the German church was not under the authority of the state; it repudiated the anti-Semitism and other heresies of the German Christians and their “official” church led by Müller. (emphasis added)

As Weikart said, the Barmen Declaration doesn’t address anti-Semitism. Metaxas said the document repudiated it.
Two other Bonhoeffer scholars have written critical reviews which point out some of the book’s errors. I don’t know the political views of Victoria Barnett or Clifford Green but I do know they know their Bonhoeffer. They point out many syllables which should be examined (See Barnett’s review here, and Green’s here).
For my part, I have documented that the quote Metaxas attributes to Bonhoeffer — Silence in the face of evil is itself evil. God will not hold us 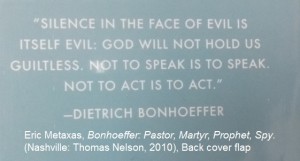 guiltless. Not to speak is to speak. Not to act is to act — did not come from Bonhoeffer’s works. In fact, I have repeatedly asked Metaxas for a citation for the quote or, in absence of a source, a retraction and he has never responded.*
Even though I am confident in my work, I cannot imagine claiming that it is flawless or infallible. In fact, people who claim such perfection should arouse our skepticism. Rather than bask in the glow of his guest’s flattery, I hold out hope that Metaxas might eventually take a more reasonable and scholarly approach.
Later in the broadcast, Dr. Arnn suggested that Metaxas consider college teaching. I do not second that motion. One must be prepared to accept peer review and critical reflection in order to do so. Apparently, Metaxas believes he has no need of such refinement.

*This is not the first time Metaxas has minimized his factual errors. See his response to significant problems with the historical accounts in his new book, If You Can Keep It (link, link). See also this new review at Christ and Pop Culture.