During the debate between Clinton and Trump last night, Eric Metaxas tweeted the following:

Hillary said in passing that “America is great because America is good.” Although the quote is commonly associated with Tocqueville, it can’t be found in his works.
During the debate, Clinton did not attribute the quote to Tocqueville. However, Metaxas himself attributed that quote to Tocqueville in an advance copy of his new book If You Can Keep It. The attribution of the quote was corrected before publication.
I understand the analogy he tweeted. However, it is noteworthy that Metaxas complained about Clinton’s use of the quotation because he has his own quote snafu to resolve. Metaxas has yet to provide a source (or acknowledge the quote isn’t Bonhoeffer’s) for the following quote:

This quote is attributed to Bonhoeffer on the back flap of Metaxas’ biography of the German pastor. He also has referred to it in his speeches and tweets as well as his book on Miracles and a study edition of the Bonhoeffer bio. However, it cannot be found in Bonhoeffer’s works. I have contacted Metaxas and publisher Thomas Nelson but have yet to receive the courtesy of a reply. 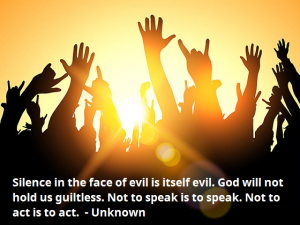 There is no disgrace in getting a quote wrong. Scholars do it frequently. The mark of a scholar is to correct the record quickly. To me, this seems especially important since Metaxas has lately taken to advancing Bonhoeffer in the cause of presidential politics. Despite our differences, I urge Metaxas to do the right thing and either provide his primary source for the quote or acknowledge the quote doesn’t come from Bonhoeffer.