Even though David Barton has gone quiet about his claim to have an earned doctorate, his Wallbuilders Facebook page still refers readers to his work under the byline Dr. David Barton. 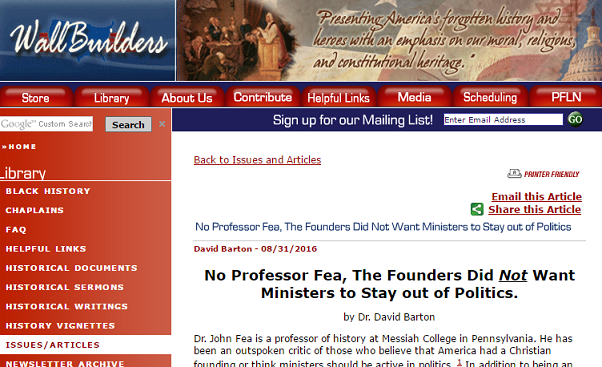 On the newly revamped Wallbuilders Live bio of Barton, reference to his BA at Oral Roberts University has been removed.
On September 7, Barton claimed in a video posted on his Facebook and You Tube accounts that he had an earned doctorate. However, the next day Barton removed the video and Facebook post without explanation. While Barton did not mention Life Christian University as the source of the degree on the original video, it appeared to be a LCU diploma. Later, LCU president Douglas Wingate confirmed that Barton’s doctorate came from LCU.
LCU awards what president Wingate calls earned degrees to famous Christians who never attend or graduate from the school.  Wingate examines their written works and other materials to award a doctorate based on life experience. Despite the face that awarding a degree solely based on life experience is one of the marks of a diploma mill, Wingate defiantly defends the practice.
Other LCU “distinguished degree holders” who did not attend or graduate from LCU include Joyce Meyer, Benny Hinn, and Kenneth Copeland. Meyer prominently touts her “earned PhD in theology” on her website.