In his new edition of The Jefferson Lies, David Barton claimed that I recruited Jay Richards to find Christian historians who would engage in a campaign against him. That charge is still false.
I denied the charge in a post here and in a review on The Jefferson Lies Amazon page.
Today someone at Barton’s organization, Wallbuilders, replied to my review with an accusation that I told one story in the review and another story to some undisclosed persons. See below: 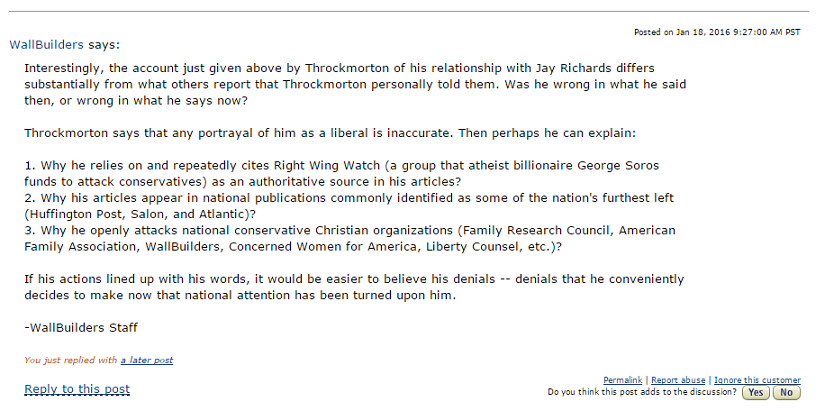 At one point in November 2013, Barton claimed that “secular guys” recruited Christian professors to attack Barton. At the time, I wrote:

Barton claims his Christian critics were recruited by “secular guys.” Of course, this is flatly false, at least in my case and anyone I know. No one recruited Michael Coulter and me to critique Barton’s book. Furthermore, there are dozens of Christian professors who have critiqued Barton’s work simply because it is the right and honest thing to do.

Jay Richards is a Fellow at the Discovery Institute who recruited 10 scholars to read our book and The Jefferson Lies. None of these scholars were recruited by secular people to critique Barton.

Even the Family Research Council recognized flaws in Barton’s presentations and pulled his Capitol Tour video from view. Also, Focus on the Family edited Barton’s talks to remove two major historical errors. Perhaps Barton is going to include FRC and Focus on the Family among those recruited by the unnamed “secular guys.”

I don’t know if Barton, Wallbuilders or WND will ever admit it, but it is undeniable that numerous conservative Christians have come forward with major academic critiques of the claims presented by Wallbuilders.

To support his claim that I recruited Richards, Barton wrote this footnote in the new edition of The Jefferson Lies.

The publisher of another of my works, The Founders Bible, released after The Jefferson Lies, reported to me some unexpected and unsolicited contacts he had with Warren Throckmorton, explaining: “About a month ago, I started to get hounded by Throckmorton via email and on our website. He even called my former publishing partner and ended up issuing a warning and a threat. Warren ‘warned’ that he had assembled a coalition of people, supposed conservative Christians, who were mounting a campaign against David. If we intended to publish The Founders’ Bible, anyone associated with Barton was likely to suffer financially, because they were going to come against him. Sort of hit me blindside.” I received this email from the publisher of The Founders Bible on August 16, 2012.
Barton, David (2015-12-22). The Jefferson Lies: Exposing the Myths You’ve Always Believed About Thomas Jefferson (Kindle Locations 4669-4675). WND Books. Kindle Edition.

Jay Richards contacted me in May 2012. He told me he had been commissioned to contact Christian historians to explore fact claims in The Jefferson Lies. While I was happy to hear that Richards was involved, I did not recruit him. Later, I made contacts with my friend and the publisher of The Founders Bible in July 2012, months after Richards first contacted me.

I have yet to hear from Wallbuilders about their claims but will update this post if I do.