Click here for the current official text of the Anti-Homosexuality Bill.

This morning AFP news service has an article that correctly reports the story about the bill, amendments and the process involved.

Parliament officials said Thursday that the bill — which US President Barack Obama has described as “odious” — had been reintroduced in its original format, which included the death penalty clause.

Bahati continues to say he will recommend the removal of the death sentence for aggravated homosexuality.

A Ugandan lawmaker behind a proposed draconian anti-gay bill that sparked an international outcry said Friday he wanted to drop clauses that would see the death penalty introduced for certain homosexual acts.

“There will be no death penalty at all…that will go,” David Bahati, the legislator who formulated the bill, told AFP.

As expected, Bahati will recommend the removal of the requirement to report known gay people. However, he wants to zero in on “promotion.”

Bahati said the bill was now focused on stopping the promotion of gay rights, and retains a proposal to criminalise public discussion of homosexuality with a heavy prison sentence.

Here is the section in the existing bill on promotion of homosexuality: 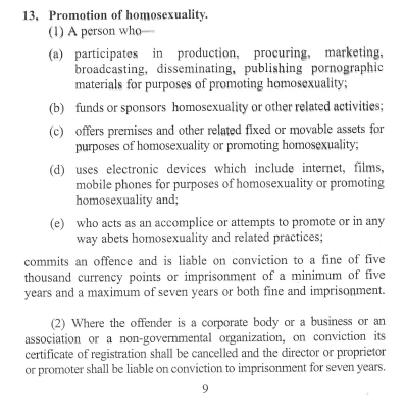 The way this is worded, landlords will not be able to rent to gays, most public establishments will be reluctant to serve more than one gay person at a time, if at all. Gay people using cell phones or the internet (bloggers, emailing, etc.) will be in jeopardy. The potential for use of police power to snoop on private citizens is heightened and the potential to use this law to accuse enemies of promoting homosexuality seems clear. While this seems to be intended to put GLB rights groups out of business, the reach goes far beyond those groups.

Although the reporting requirement has been dropped, I don’t think health care professionals are in the clear. If they give advice to a GLBT person that affirms them, then I believe the way this aspect of the bill is worded, then they might violate the very broad language here.

This clearly violates freedom of conscience for those who are gay and those who are not. If a religious leader is convinced that GLBT persons should be treated with respect and dignity, then they could be viewed as engaging in promotion.

I hope the watching world is not thrown off by the possible removal of the death sentence. This effort remains sinister and has the effect of violation of freedom of conscience and other basic human rights.