This morning Helen Kawesa, Public Relations Manager for the Uganda Parliament provided this copy of the Anti-Homosexuality Bill which was introduced on Tuesday. As you will see, it is the same bill as was printed in Uganda Gazette on September 25, 2009 and then first tabled on October 14, 2009. Click the screen capture to go to the Gazette copy. 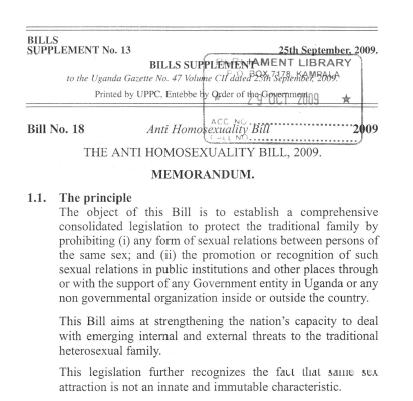 To date, the bill has not been amended and this is the version re-introduced on February 7, 2012.

This morning AFP news service has an article that correctly reports the story about the bill, amendments and the process involved.

Parliament officials said Thursday that the bill — which US President Barack Obama has described as “odious” — had been reintroduced in its original format, which included the death penalty clause.

Bahati continues to say he will recommend the removal of the death sentence for aggravated homosexuality.

A Ugandan lawmaker behind a proposed draconian anti-gay bill that sparked an international outcry said Friday he wanted to drop clauses that would see the death penalty introduced for certain homosexual acts.

“There will be no death penalty at all…that will go,” David Bahati, the legislator who formulated the bill, told AFP.

However, it remains to be seen whether or not the Parliament will alter the bill in the way Bahati now proposes. Two sources within Parliament have informed me that the MPs will be inclined to agree with recommendations made by Bahati and the Legal and Parliamentary Affairs committee. If he can be believed, Bahati’s strategy seems to have shifted to making it dangerous for GLBT people communicate or gather. More on this in the next post…