According to Parliament spokeswoman, Helen Kawesa, David Bahati’s Anti-Homosexuality Bill is on the agenda to be tabled for a first reading in today’s session of Parliament.

Kawesa said, “The bill will go through a new process again. It is a new Parliament.” This means that the bill will be referred today to a committee for study and recommendations. According to the Kawesa, the entire process of a first reading, referral to committee, public hearings and then a committee report to Parliament will be followed. She said, according to the rules of Parliament, the bill cannot be passed today.

She said the bill was basically the same bill as was almost considered in the 8th Parliament. She had no explanation for why the bill was not being considered where it was stalled back in May, 2011.

UPDATE: 8:15am – According to a person in the plenary session of Parliament, Speaker Kadaga said the bills renewed from the 8th Parliament will be read for the first time today but reports on the bills from the 8th Parliament will be used as a basis for moving toward a 2nd reading and debate. If true, this means that the time from first reading to second reading, debate and possible passage will be much shorter than would be true if a new bill was introduced.

UPDATE: 11:05am – There was a rumor that David Bahati would ask for a special action of Parliament to make today’s introduction count as a 2nd reading of the bill, thus allowing discussion and a possible vote. However, according to Ms. Kawesa, Parliament has concluded for the day with no further action on the AHB. In addition, it appears that similar Parliamentary rules will apply to the timing of a second reading as was applied to the first reading in 2009. This means that a minimum of two weeks must pass before the second reading can be accomplished.

Based on reports from Parliament in October, 2011, it was anticipated that the anti-gay measure would be considered by the new Parliament without repeating the first reading. During the October 2011 session, the Parliament voted to return unfinished business from the 8th Parliament to the current session. At that time, Kawesa said that Speaker of the House Rebecca Kadaga’s Business committee could recommend that the anti-gay bill go back to committee or it could recommend that the former committee report become the basis for debate in the Parliament. Based on the Kawesa’s statement today, the bill is starting over in committee.

The original committee report from Stephen Tashobya’s Legal and Parliamentary Affairs committee left the severe aspects of the bill intact, including the death penalty and life in prison (see an analysis here; here is what the bill would look like if all of the committee’s changes were made).

Today’s order paper is below. Note that the bill is slated for a first reading (click to enlarge). 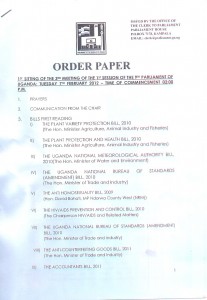 KAMPALA, Uganda (AP) — A lawmaker in Uganda is reintroducing an anti-gay bill that received wide condemnation, including from President Barack Obama.

The bill was reintroduced Tuesday by David Bahati, the bill’s primary backer. It was originally introduced in 2009 but has never come before the full parliament for a vote. The original draft legislation languished in a committee of parliament as the Ugandan government grappled with the international opposition it generated.

The original draft called for the death penalty for some homosexual acts, one of the reasons the bill received so much attention. Bahati told The Associated Press last year that he is willing to drop that provision if that is the recommendation of a parliament committee.

UPDATE: 11:30am – According Melanie Nathan’s interview with David Bahati this morning, the original AHB was re-introduced this morning without changes. Bahati told her that the committee would be recommending changes in the course of their work.

Full text of the Anti-Homosexuality Bill 2009 as introduced on October 14, 2009 and today.

If the initial committee report were implemented in the coming days, the AHB would look like this.

UPDATE: 2/8/12 – Parliamentary research service staffer Charles Tuhaise told me this morning that the bill introduced in Parliament yesterday was the original bill first introduced in October, 2009.  Any amendments will come via affirmative vote on the floor of Parliament after the 2nd reading.