Last evening, the Springboro School Board canceled two Constitution classes which had drawn protests from parents, teachers and students.  Notice of the board action was posted on a Facebook site called Springboro United for Responsible Education.
According to WHIO, school board member Jim Rigano issued a statement saying in part, “We felt that having the community participate with evaluating these courses would be an excellent opportunity for schools and community to work together. Instead, the courses have received some criticism from the community, which we take very seriously.”
Some Springboro citizens had sent an open letter to the school board and created a petition at Change.org.
Yesterday, I reported here on Institute on the Constitution’s ties to white supremacist group League of the South.
While the cancellation is a step in the right direction, I am confident that parents and community groups will continue to press for answers to questions about why the IOTC was considered a viable resource.
Below is the entire press release:

Springboro Community City Schools News Release
For Immediate Release
July 3, 2013
CONSTITUTION COURSES CANCELLED
SPRINGBORO- Springboro Community Schools has cancelled two community education courses on the U.S. Constitution originally scheduled for this summer.
“We felt that having the community participate with evaluating these courses would be an excellent opportunity for schools and community to work together.  Instead, the courses have received some criticism from the
community, which we take very seriously,” said Jim Rigano, Board of Education Vice President.  “We wanted to allow time for additional review to fully investigate community concerns.”
The two courses were a 12-week course by the Institute on the Constitution scheduled to run from July 9 through September 24, and a one day seminar by the National Center for Constitutional Studies.
Anyone currently registered for the 12-week course by the Institute on the Constitution should contact instructor Ricki Pepin at 937-322-3149 for a refund or other information. Those who registered for the seminar with the National Center for Constitutional Studies through Springboro Schools will receive a refund.

Yesterday, I wrote about a summer course on the Constitution offered by the Institute on the Constitution (IOTC) and advertised to the public by the Springboro School District. According to media reports, the school district plans to evaluate the course for possible inclusion in their schools. See yesterday’s post for a flyer describing the course.
The Institute on the Constitution was founded and is directed by Michael Peroutka. Peroutka was the 2004 presidential candidate for the Constitution Party. According to the website of the IOTC, their Constitution course is taught by Peroutka and Pastor David Whitney. In Springboro, the course is facilitated by Ricki Pepin but includes materials from the IOTC, David Barton and John Eidsmoe.
In 2012 and 2013, Michael Peroutka spoke at the League of the South’s annual convention (John Eidsmoe was there as well) and gave his enthusiastic support to the organization. Fellow Constitution course instructor David Whitney is the Chaplain of the Maryland chapter of the League of the South. The League of the South appears to believe in white supremacy and promotes the secession of the Southern states from the nation.  From their website:

Q: Where, when, and why was The League of the South (LS) formed?
A: The LS was formed in Tuscaloosa, Alabama, in June 1994, to organise the Southern people so that they might effectively pursue independence and self-government.
Q: Does the LS favour political secession as a legitimate option for Southern (and other) states?
A: Yes, but we realise that secession is not a practicable alternative at present. When enough people come to realise the futility of attempting to reform the present corrupt system, however, it will be practicable.

Q:  Whence the name: “The League of the South”?
A: Our name comes from two different sources:

(1) Lega Nord (Northern League), a very successful populist movement in northern Italy, to which the LS has personal ties, and (2) the League of United Southerners, organised by Edmund Ruffin and William Lowndes Yancey in 1858 to shape Southern public opinion.

Q:  What is the LS position regarding blacks in the South?
A: The LS disavows a spirit of malice and extends an offer of good will and cooperation to Southern blacks in areas where we can work together as Christians to make life better for all people in the South. We affirm that, while historically the interests of Southern blacks and whites have been in part antagonistic, true Constitutional government would provide protection to all law-abiding citizens — not just to government-sponsored victim groups.

Q:Why does the LS seek to protect the Anglo-Celtic core population and culture of the historic South?
A: The Anglo-Celtic peoples settled the South and gave it its dominate culture and civilisation. We believe that the advancement of Anglo-Celtic culture and civilisation is vital in order to preserve our region as we know it. Should this core be destroyed or displaced the South would be made over in an alien image — unfamiliar and inhospitable to our children and grandchildren. We, as Anglo-Celtic Southerners, have a duty to protect that which our ancestors bequeathed to us. If we do not promote our interests then no one will do it for us.

Michael Peroutka at the League of the South convention, 2012. Note which flags are flying and which are not. 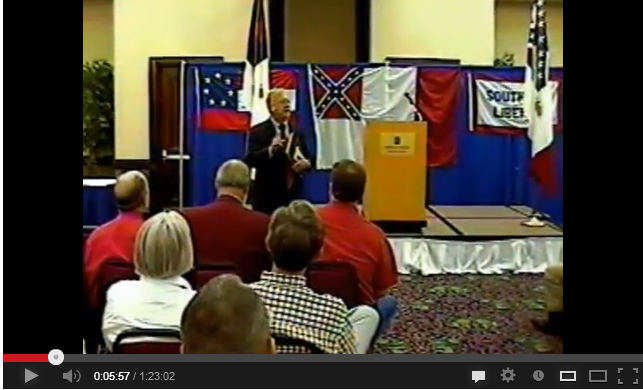 As it stands, the Springboro School District is offering to the public a course in the Constitution developed by members of an organization who desire to promote the dominance of the Anglo-Celtic people, the secession of Southern states from the nation, and align themselves with the pro-slavery fire-eaters of the Confederate South.
It is quite possible that the Springboro board members were unaware of these matters when the course was approved. Messages left for the board on these points have not yet been answered.
Additional information:
The relationship between the League of the South and the IOTC goes back a few years. A LS newsletter advertised the IOTC Constitution course as being compatible with the LS.

Former Presidential candidate Michael Peroutka co-founded the Institute on the Constitution (IOTC), the program that will run at the Middle Georgia Chapter’s Hedge School in April (see right). According to Chapter Chairman Ben Davis, it is an excellent resource which lends itself very easily to the League message. Davis encourages fellow chapter leaders to host IOTC in their localities. For more information, go to www.iotconline.com.

The LS President Michael Hill leaves no doubt where he stands on race in this essay: Our Survival as a People. From the essay:

Because Christian liberty has been the product of Western civilization, should the white stock of Europe and American disappear through racial amalgamation or outright genocide, then both liberty and civilization as we have come to know them will cease to exist. As whites have lost the will to defend their inheritance, there has been a corresponding increase in the willingness of the colored races to destroy Western Christian civilization and replace it with their own vision of the “good society.” That vision, or nightmare, as it were, will have no truck with the rule of law, equity, or fairness. It will be predicated on the “intimidation factor”–the employment of brute force by the strong against the weak. In short, it will be “payback time” for the alleged mistreatment that minorities-cum-majorities have suffered at the hands of the White Devils.

UPDATE: July 3, 2013, 11:35pm  – The Springboro School Board has canceled the classes mentioned in this post. Watch the blog for more information.