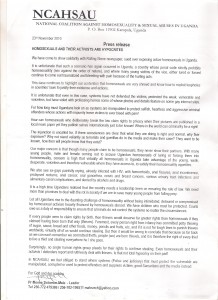 This just in from Gay Uganda.

At the Rolling Stone’s day in court yesterday, Pastor Moses Male (you can watch him in action here) declared solidarity with the Rolling Stone’s outing campaign. I have three independent reports that gays were chased away from the court house and one was attacked.

The flyer that Male was distributing is on the right. Click the image to read it.

Male baits GLBT people to make a public stand, but he supports a tabloid which has incited violence against them. Male was one of the ministers, along with Martin Ssempa, who was investigated for making a false report of homosexuality about Rev. Robert Kayanja.

The court extended the ban on outing GLBT people until Friday when the Rolling Stone will present a case.