Must have been a heady moment to be with Donald Trump and keep her Miss California crown. Carrie Prejean reminded people that she and the President hold the same position on same-sex marriage…(well probably not exactly the same if you consider his approach to Prop 8).
And a nice trifecta today: keep the crown, hang out with Trump and featured guest again on the Focus on the Family radio show. All in all a better day than some of the last few.

The Miss California pageant held a news conference today on the topic of Carrie Prejean. Many reported in advance that her Miss California crown would be removed during the press conference today. However, according to Keith Lewis and Shanna Moakler, Directors of the Miss California pageant, a decision about firing Prejean will come tomorrow from brand owner Donald Trump. I wonder if Trump’s press conference will come from the boardroom.
It certainly sounded like the two directors recommended her release although they refused to make it explicit. Essentially, they said Prejean had skipped scheduled Miss California events and that she was only available through her “handlers.” They stressed that if she was dismissed, it would not be because of her views on marriage but how she had related to the pageant since Miss USA.
The harshest criticism however came from Keith Lewis and was aimed at Maggie Gallagher and the National Organization for Marriage. Lewis claimed 42% of NOMs funds went to Gallagher and that NOM engaged in copyright infringement by using Miss California footage for a NOM ad campaign.
Lewis also addressed other unnamed Christian organizations saying, “Shame, shame, shame” for exploiting Miss Prejean and placing her in a situation where she had breached her contract. He accused these groups of encouraging her to speak on their behalf even though it meant she was at risk of losing her title.

Lots of reporting out today on the subject; Prejean and her mother are featured today and tomorrow on Focus on the Family broadcasts.
During the opening of the broadcast, Dr. Dobson said Carrie would be stripped of her crown today. According to the Prejean camp, that is not known at this time. Prejean representative, Melany Ethridge emailed to say the pageant has not notified them of what will be announced.
Also, prior to the broadcast, Dobson mentioned the semi-nude picture of Prejean at age 17. That picture surfaced since the interviews were recorded. About that photo, he said,

We agree with you in the audience who oppose that kind of sensuality. Focus on the Family has been a strong supporter of modesty and righteousness in the culture for many years. And yet we have chosen to go ahead and air these two programs after Carrie explained that the pictures were taken when she was 17 years old; she’s now 21 and in fact will be 22 on Wednesday and she regrets doing it and said she would not do it again.

Prejean also said on Friday that she would not take some of the more recent work she has done as well.

Is anyone else puzzled by the response to our new family values spokeswoman? For taking a position against same-sex marriage in a beauty contest, she gets invited to the Dove Awards and offered a scholarship to attend Liberty University during her senior year by Chancellor Jerry Falwell, Jr.
Now she will soon appear in an anti-same-sex marrage ad. 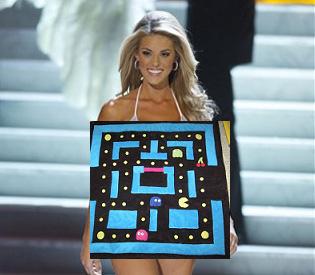 Cover (up) Girl and Miss California, Carrie Prejean.
Will she be able to abide by the dress code at Liberty U.? Probably will need some new swimwear…
Before some of my readers get all uppity, let me add that I think Perez Hilton was a jerk about the whole issue, should never have asked such a volatile question and reacted in extremely poor taste afterward. But unless religious conservatives have some kind of answer to our girls about how they can lionize a Miss USA contestant and stress modesty at the same time, I do not see the virtue in giving her the platform.