If I was of a mind to write a parody of a Charismatic minister writing about Donald Trump, an article like this would have been a good result.
Writing for Charisma Magazine’s Prophetic Insight section, “prophetic minister” Jeremiah Johnson compared Donald Trump to Cyrus in the Bible. Referring to Trump or someone like him, Johnson says:

Could God not use the wicked and ungodly to bring about His plans and purposes thousands of years ago and can He not still do the same thing again, especially in the midst of the crisis that we find America in today?

Then Johnson writes that the Holy Spirit told him Trump would become…. (wait for it)…. His “trumpet to the American people.”  According to Johnson, the Holy Spirit sounds a lot like a Trump spokesman:

Trump shall become My trumpet to the American people, for he possesses qualities that are even hard to find in My people these days. Trump does not fear man nor will he allow deception and lies to go unnoticed. I am going to use him to expose darkness and perversion in America like never before, but you must understand that he is like a bull in a china closet. Many will want to throw him away because he will disturb their sense of peace and tranquility, but you must listen through the bantering to discover the truth that I will speak through him. I will use the wealth that I have given him to expose and launch investigations searching for the truth. Just as I raised up Cyrus to fulfill My purposes and plans, so have I raised up Trump to fulfill my purposes and plans prior to the 2016 election. You must listen to the trumpet very closely for he will sound the alarm and many will be blessed because of his compassion and mercy. Though many see the outward pride and arrogance, I have given him the tender heart of a father that wants to lend a helping hand to the poor and the needy, to the foreigner and the stranger. 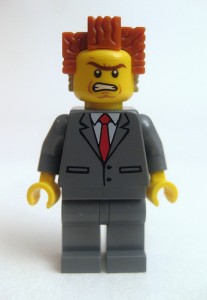 In a strange way, Trump isn’t allowing deception and lies to go unnoticed. Just look at his attack on John McCain. Trump deceived all over the place and didn’t let it go unnoticed.
I think the next prophecy should be about President Business from the LEGO movie. He has all those tough guy qualities too.
Hat tip to Alan Noble.