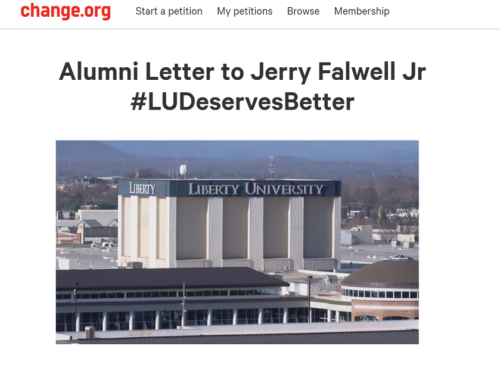 After having a come to Jesus moment with African American board members, Jerry apologized one of those apologies that says sorry if you got upset. WaPo has the story. They also report that another African American staffer –Keyvon Scott– has resigned over the matter.

In a sign that more resignations may be coming, The Chronicle of Higher Education reported yesterday that Liberty’s former Director of Diversity Retention, LeeQuan McLaurin not only resigned but has started something he calls LUnderground Railroad to help current African American staff at Liberty to leave.

LUnderground Railroad is a gofundme page designed to raise $2000 to give to 15 Liberty employees to help them leave the school. Dissent is not allowed there so they must remain silent. LeeQuan hopes these funds will help them get out of what they believe is a toxic environment.

And that may be all they have to look forward to. Nothing will change on campus if the board chair’s response is any indication. From the Chronicle:

Jerry Prevo, chairman of Liberty’s Board of Trustees, said the board met with Falwell last week to discuss his recent tweets and that the executive committee is satisfied with his response to the furor the tweets caused.

“We understand these images have been hurtful for a number of our friends to see,” Prevo said. “We also know him and know him not to be a racist. Nor do we believe that he has been running Liberty University in a way that discriminates against African Americans.”

Apparently, Mr. Prevo isn’t doing exit interviews with the people who leaving and want to leave.

The petition from African American alums now has nearly 38,000 signers and is still taking signatures here.