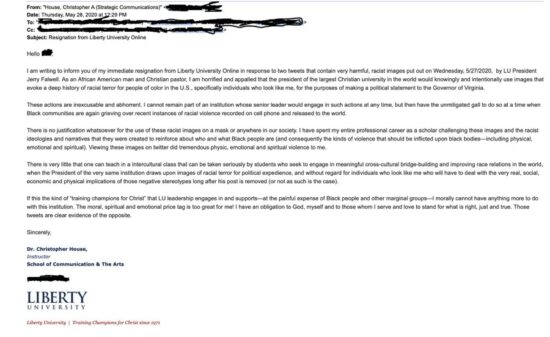 In normal times, this story would rock the evangelical world. As things stand, it barely registered. However, examining the situation, it is incredible that Jerry Falwell is still president at Liberty University.

On May 27, Falwell tweeted:

Just so folks outside Virginia unfamiliar with the pic on the mask understand: it is from the personal page of the medical school yearbook of @GovernorVA . Just a way to shine a spotlight on the fact that Democrats are and always have been the real racists in this country.

In response, one of Liberty’s online professors, Christopher House, resigned. Dr. House, an African-American pastor and scholar rejected Falwell’s justification for the tweet. His full explanation is at his Facebook page.

Yes I did resign today from teaching an online course for Liberty University! As a Black pastor and scholar who does work on racist memorabilia, I am disgusted at Falwell use of Blackface and KKK outfits. This does not represent the God of the Bible! pic.twitter.com/FC1Yh75GNj

Yes, the picture on the mask was taken from Gov. Northam’s medical school yearbook. It is also true that Gov. Northam is many years removed from medical school and apologized for his participation in the photo. He also faced widespread condemnation from his own party with numerous calls for his resignation. He disavowed it and is obviously ashamed of it.

Thus, Falwell’s use of the pic is opportunistic. He knows Northam doesn’t stand by the photo, and he knows numerous Democratic leaders called for Northam’s resignation. His use of that photo is now on him. He has to own it because he chose to use it. About the mask, he said he “designed my own.” He chose to use a photo of blackface and a KKK hood to make his silly political point.

So here we are. A Christian college president used some of the most painful imagery for African-American people that can be used to make his point. Apparently, it doesn’t matter who he hurts, offends, or angers, Jerry Falwell, Jr., large and in charge, must express his opposition to the inconvenience of a little mask on his face.

Falwell might protest that he is attacking the racist Northam. This is bogus. Northam disavowed it and is attempting to atone for his sins. Falwell appears to be oblivious to the pain this causes. He sins to make a point that could be made in so many other ways. In fact, his actions have now obscured the point he wanted to make.

There is very little that one can teach in an Intercultural class that can be taken seriously by students who seek to engage in a meaningful cross cultural, bridge building and improving race relations in the world when the President of the very same institution draws upon images of racial terror for political expedience, and without regard for people who look like me who will have to deal with the very real, social, economic and physical implications of those negative stereotypes long after his post is removed (or not as such is the case).

Symbols of racism are just that: symbols of racism. They aren’t analogies for perceived slights by white people. A mask using painful images of racism isn’t — will never be — an appropriate advertisement for your political grievances.

Good for Dr. House. I wish him well.