Francis Chan and K.P. Yohannan are out with press releases and a video conversation designed to rehabilitate Gospel for Asia’s reputation. Francis Chan is investing his substantial reputation in this effort and I hope it is worth it to him. The men are hoping to convince donors that it is safe to trust Gospel for Asia now that the mission giant has settled a fraud lawsuit with Garland and Phyllis Murphy.

In the Chan-Yohannan conversation, several questions are raised which demand answers if they expect to be trusted. In this post, I will take two issues which pertain to K.P. Yohannan’s (or as he is known in the Believers Eastern Church “Moran Mor Athanasius Yohan Metropolitan“) status as Metropolitan of the Believers Eastern Church in India. First, here is the segment of the video where he claims he is equal to the other bishops, and that nobody kisses his ring.*

Yohannan and His Power

Yohannan says “I have no greater power than the 30 other bishops.” I have questions for Chan and Yohannan about that statement.

According to the Believers Church constitution (see also chapter three), the Metropolitan is the “final authority” on all matters ecclesiastical and temporal. 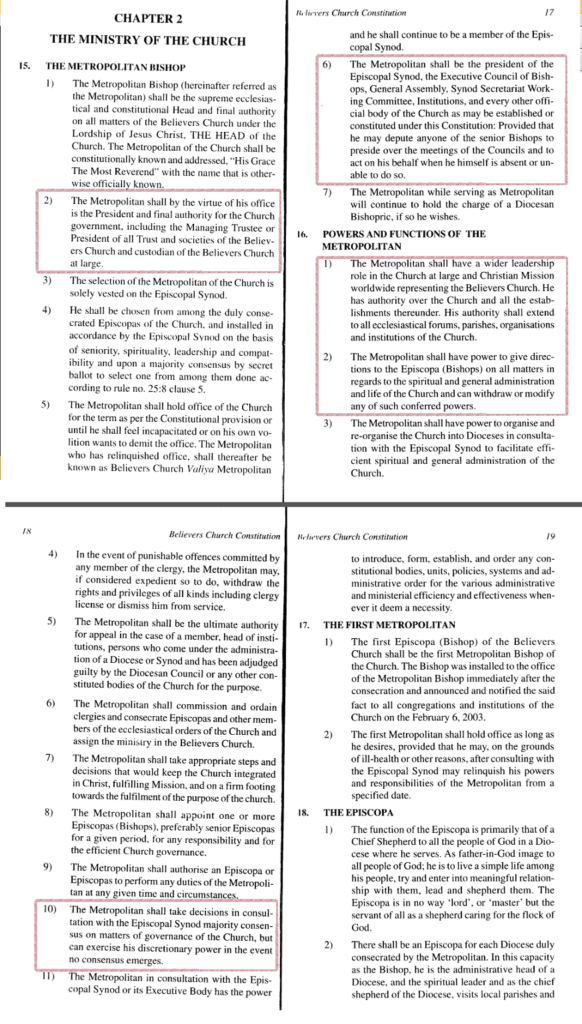 Yohannan serves until he wants to leave and is the head of all bodies in the church. He can’t be removed. None of the other 30 bishops have that kind of power. The Metropolitan can appoint and disband committees and clergies, consecrate Bishops, and when he decides there is not a consensus of bishops he can exercise his “discretionary power.” No one else can do that.

According to the Constitution, the Metropolitan also is co-owner with Believers Church of all property maintained by the church. From Chapter three: 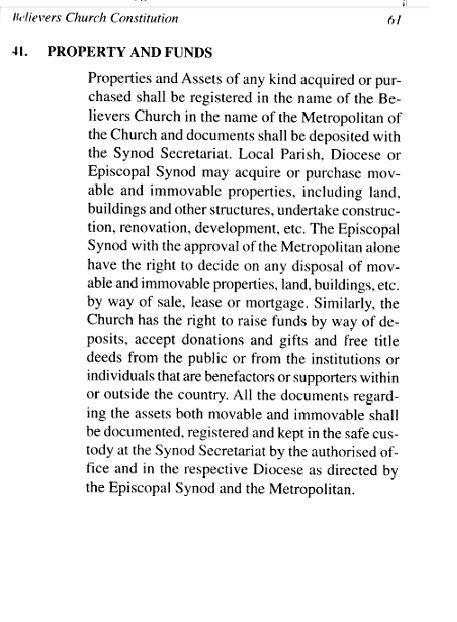 In 2005, local church pastors were reminded to register property in Yohannan’s name. This letter was sent to make sure they did it according to church policy. 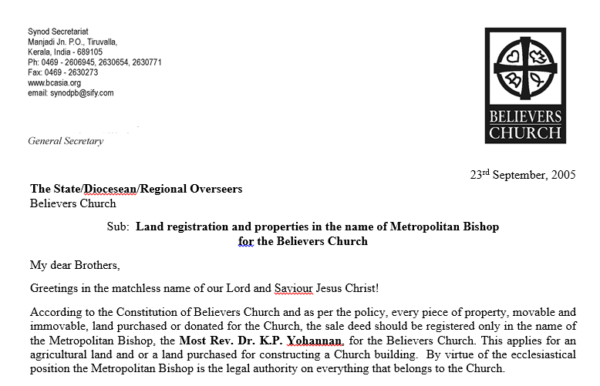 And then finally, there is the 2015 email from former GFA Chief Operating Officer David Carroll to K.P. Yohannan which asked Yohannan how he could explain Yohannan’s claim not to be in charge of things in India. Click here to read a transcript of the email which came to light as a part of discovery in the Murphy v. GFA case. The relevant segment is when Carroll wrote to Yohannan:

We can say all we want that we don’t have anything to do with the Believers Church or the field and that you are only the spiritual head of the church and that finances are handled by others but you, but as a practical matter, that will not hold up.

As many former staff members and at least one former board member (Gayle Erwin) acknowledge, K.P. Yohannan has much more power than the other 30 bishops. Now, Metropolitan and Rev. Chan could you please explain why these documents tell a different story than you all told on the video?

Yohannan told Chan, “We do not have a practice of people kissing my ring.” Then what is this from K.P. Yohannan’s birthday video:

Yohannan wears his Metropolitan ring on his right hand.

Now review this video of an ordination ceremony. One can’t see lips to ring but it doesn’t really look like a hand to the forehead either. It appears to me that the priests are kissing his right hand.

While these matters are not as large as where millions of dollars went (see David Carroll’s email for more about that), they do make me question credibility. Chan and Yohannan want the public to believe every word they say. However, here is direct evidence my eyes can see which contradicts what they are telling me on this new video. What am I supposed to believe?

Since 2015, I have repeatedly asked GFA for answers to these kind of questions. I have asked them why K.P. Yohannan’s name is all over legal documents in India and why the Believers Church constitution says he is the supreme authority when at the same time. he tells American audiences that he isn’t. I have gotten no answers. Sorry Rev. Chan and Metro Yohannan unless you provide some answers that make sense, I will believe my eyes.

*On September 2, 2019, YouTube issued a take down notice of my fair use video clip of Yohannan’s and Chan’s conversation. Although I believe the clip was fair use of that material for the purpose of commentary, I am not going to fight it at this point because I can simply embed their YouTube version which starts at the point in the conversation where they discuss Yohannan’s role in The Believers’ Church.