This came across the wire today. 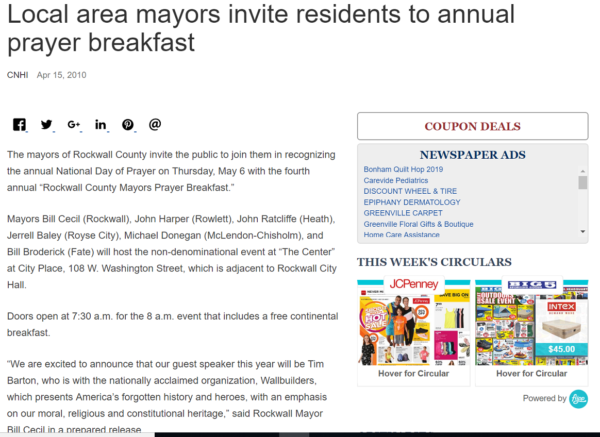 John Ratcliffe is Donald Trump’s nominee for Director of National Intelligence to replace Dan Coats. In addition to having little intelligence background or experience, questioning Russia’s role in the 2016 election and inflating his resume, he is (or at least was) sympathetic to Christian nationalism.

It seems fair to go back to Ratcliffe’s days as a mayor of Heath, TX since his public service experience is so thin. He has been a Congressman since 2014 when he defeated 91 year old Ralph Hall and conservative Republican in a primary. There is no serious Democratic resistance in the district. In that race, David Barton endorsed Hall.

Given Ratcliffe’s rise to power, no doubt now all is forgiven. In addition to a Trump loyalist, Russia doubter, Rep. Ratcliffe may be sympathetic to Christian nationalism.