Next week, the American Association of Christian Counselors is holding a conference in Dallas, TX. According to the AACC’s owner Tim Clinton, nearly 2,000 people will attend, making it one of the largest gatherings of Christian mental health professionals in the nation.

While many think of the AACC as a professional association, it isn’t like any of the other groups for psychologists, counselors, or social workers. Those associations are not-for-profit and are run by representatives elected by members. Officers are elected and paid staff are accountable to the membership through the elected representatives.

In contrast, according to all evidence publicly available, the AACC is a for profit business owned by Tim Clinton. According to a 2003 filing with the SEC, Clinton is the sole shareholder of the AACC. Clinton is president for life and the other officers work for him. The AACC advisory board doesn’t have much of a role. I used to be on what is now called the Board of Reference (then called the Advisory Board) and we never met as a board. I was never told I was removed from it. It didn’t matter because we never did anything; it was just for show.

Many professional associations have foundations which seek donations to provide support for the profession as a whole. For instance, the American Psychiatric Association Foundation solicits donations to advance research in psychiatry and funds various innovative programs. However, that is not how the AACC Foundation operates.

AACC’s business model is complex and because it is a private business, can’t be known with certainty from information available to the public. However, in an effort to better understand the relationship between AACC and the Foundation, friend of the blog and former auditor Jason Watkins and I recently reviewed data from AACC Foundation 990 forms. Watkins compiled the data from 2002 through 2016 (see an image of his spreadsheet here). My analysis which relies on his work is below.

Essentially, the AACC Foundation collects donations and sells products to support the for profit business of Tim Clinton. Less than one percent of the revenue from the past 15 years has been spent by the Foundation on charitable causes which did not benefit one of Clinton’s businesses. More on that below.

According to the IRS 990 forms, the Foundation and AACC provide services to each other. On balance the for profit AACC wins. Here is how the Foundation’s 2016 990 form described the arrangement:

The largest grant from the Foundation during the period we reviewed was given to one of Tim Clinton’s businesses — Wildfire Weekend, LLC. In 2014, Clinton canceled several Wildfire men’s conferences. These conferences featured testosterone and the Bible but didn’t get enough registrations to make money so some were canceled. To help make up the short fall, the AACC Foundation gave AACC (Tim Clinton) $230,000. See the 2014 990 entry below:

The 990 disclosed that the funds were used to “support the deficit the organization sustained in holding the conference.” Clinton didn’t make enough money on these conferences so the Foundation’s tax free revenues bailed him out.

It is worth noting that it took AACC two years in some cases to return registration fees to people who signed up but couldn’t go because AACC canceled the conference. Some of those bad reviews are still on AACC’s Better Business Bureau page. 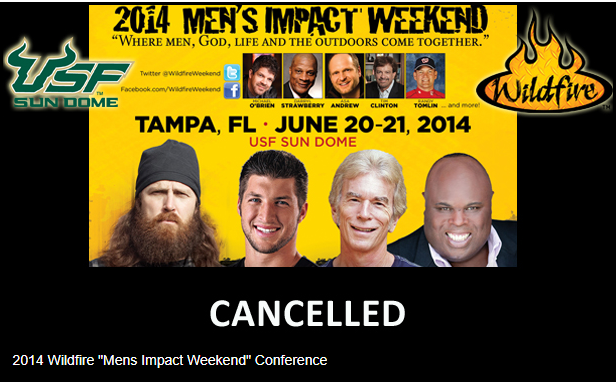 In recent years, the activity of the Foundation has changed slightly. Revenues from media sales are down while contributions are up. However, on the most recent (2016), no grants to charitable organizations are listed. The Foundation is asked on the 990 (page 2) if any new program services had been undertaken and the “no” box is checked. No accomplishments are listed in the space on page 2 for such items. Funds just go to AACC.

Clinton and his folks run busy conferences with many options. They provide contact with Christian mental health providers who want to explore how their profession and faith interact. However, Christian mental health professionals do have other options (e.g., CAPS) when it comes to how they align themselves. This information is provided for my colleagues to make informed choices.