This looks like a lawsuit. If this is what it looks like in the video below, I hope Deyshia Hargrave gets some of that long overdue pay raise in a 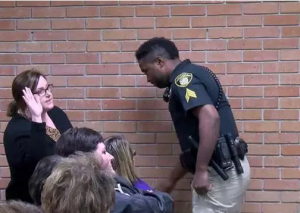 financial settlement.
According to many news services (source), Kaplan, LA middle school teacher Deyshia Hargrave questioned why her superintendent got a raise when teachers in the district had gone without a permanent raise for 10 years. Ms. Hargrave, after spending all day putting up with middle school kids, wasn’t having any of that nonsense, so she said her feelings.
That didn’t work out, as the video below shows.

The most complete report I have seen of this incident and the aftermath of it is at Heavy.com.  She was booked but then released. The prosecutor does not plan a case against her and the teacher’s union and ACLU have issued statements and are following the matter. The school board president Anthony Fontana is defiant and thinks she got what was coming to her. Amazing.
The board president and superintendent seem to like their position, but they don’t have many supporters according to the Heavy.com report. There is a petition with nearly 3000 signers at present who stand in support of Hargrave and she is considering a lawsuit.
As a son of a school administrator, my initial reaction is that this duo is out of touch with their constituents. I cannot imagine giving the superintendent a raise while the teachers have gone without one for a decade. That action does communicate that the board doesn’t care about the staff. I hope this teacher’s stand will lead to some positive action for her, her colleagues and the students in the district.