UPDATE: In the afternoon of December 6, RZIM removed the “Dr.” title from Ravi Zacharias name. To see it as it was earlier that day and before, click this link.
(Original post)
Public Relations 101
If you make a public statement, make sure you are complying with it when you make it.
On Sunday, Ravi Zacharias International Ministries said this about Ravi Zacharias use of the title Dr. The pertinent aspects are below:

The veracity of some of the educational credentials—specifically the use of the “doctorate” designation—of our Founder and President, Ravi Zacharias, have been called into question. While Ravi personally does not brandish his credentials and routinely asks not to be referred to as “Dr. Zacharias”—even by employees—our organization bears his name and, as such, we would like to take this opportunity to clear up any misunderstanding.
In earlier years, “Dr.” did appear before Ravi’s name in some of our materials, including on our website, which is an appropriate and acceptable practice with honorary doctorates. However, because this practice can be contentious in certain circles, we no longer use it.

Right now today, when you go to the International Board of Directors page of Ravi Zacharias’ webpage, here is what you will see. 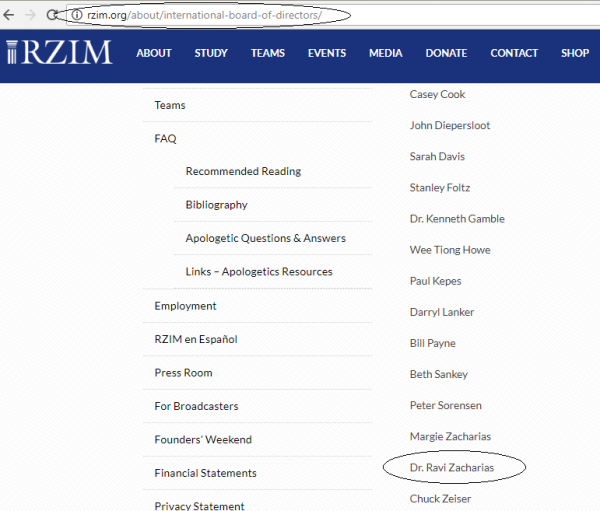 Then go to this page and this page to see more examples of how this year the ministry has contradicted the statement they released on Sunday.

This is about what reality you believe.
Reality: Ravi Zacharias and his ministry have improperly brandished the “Dr.” title for many years up to today on their own websites, have asked others to call him that, failed to correct others when it was used improperly. He also claimed honors and appointments he didn’t hold (e.g., “visiting scholar at Cambridge University”).
Reality RZIM is pushing: Ravi is humble and would never brandish the “Dr.” title (as if he has no control over what his ministry does). We (RZIM) used to do it but don’t anymore and we can’t control when other people do it.
Obviously, the ministry and Mr. Zacharias on Sunday weren’t doing what they claimed they had been doing all along. Ministry personnel from the top of the organization to those who create promotional material have referred to Zacharias as Dr. throughout the year up to the present. Those who have heard Zacharias speak at various churches have indicated that he is introduced as Dr. Zacharias repeatedly year after year. It would so refreshing for the ministry to simply admit that Ravi Zacharias’ credentials have been inflated for many years and that they are now committed to simply reporting the facts.

Prior posts on Ravi Zacharias’ credentials.

Is Dr. Zacharias in the House?
Was Ravi Zacharias a Visiting Scholar at Cambridge University?
Speaker at Zacharias Institute Fined $44-Million and Barred from Securities Industry
Fact and Fiction in Ravi Zacharias’ Response to Multiple Allegations of Misconduct