The short answer is no.
I am fact checking claims about the academic credentials of Christian apologist Ravi Zacharias made by atheist Steve Baughman. Baughman first raised his concerns in 2015 and then again earlier this month. My first post checking into Zacharias’ credentials was yesterday when I examined his improper use of the title “Dr.” Today, I take up Zacharias’ claim about being a visiting scholar at Cambridge University. As far as I can tell, this claim first showed up in Intervarsity promotional material in 1993.
There are some facts mixed in with a misleading statement, so let’s examine the details.
Zacharias said he studied at the University of Cambridge in 1990. In his book, Walking from East to West: God in the Shadows, Zacharias wrote: 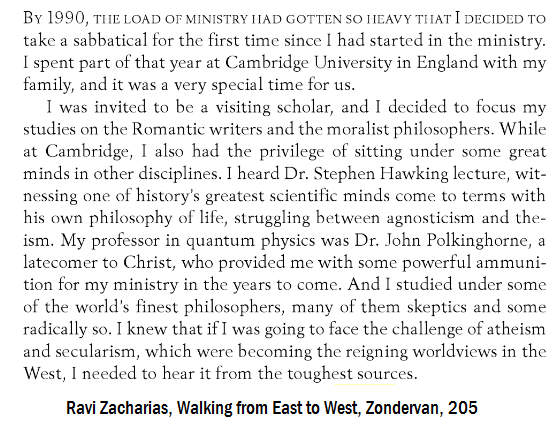 He made the claim more succinctly in at least four other books. For instance in his 2004 book, Can Man Live Without God?, he wrote:

Was Ravi Zacharias a Visiting Scholar at the University of Cambridge?

Regarding his studies at Cambridge, Professor Jeremy Begbie (Senior Member, Wolfson College, University of Cambridge; former Associated Principal, Ridley Hall, Cambridge) has provided the following written statement: “I can confirm that Ravi Zacharias was a visiting scholar at Ridley Hall Cambridge in 1990, under my supervision. His courses included guided research with Dr. Begbie, lectures from resident and visiting instructors in the Romantic writers, lectures at the University’s Divinity School from Don Cupitt, additional course in quantum physics with Dr. John Polkinghorne, and studies in world religions with Dr. Julious Lipner and others.

I wrote Dr. Begbie, who is now at Duke University and asked if this statement was accurate. He replied:

Yes – my statement is accurate (although Lipner’s name is misspelt – it should be Julius). RZ [Ravi Zacharias] was invited by Ridley Hall, not the University. Ridley Hall is not, and was not then, run by the University. The lower case “visiting scholar” was chosen to make it clear that to my memory he was not given a formal title – but he was exactly what the words say: a visiting scholar. Polkinghorne taught courses in theology and science for many years after relinquishing his University position in physics.

Zacharias Was Invited to Ridley Hall Not the University of Cambridge

This is still a bit of an embellishment. It appears he really wants people to know he spent a few months attending lectures in Cambridge, England. However, there is no meaningful connection between Ridley Hall and the University of Cambridge which is relevant to a bio.

Prior post in this series: Is Dr. Zacharias in the House? Did Ravi Zacharias Claim to Have Doctorates He Doesn’t Have?