Last week, I posted a link to an article by Steve Baughman at Ordinary Times on Culture and Politics on the academic credentials of Christian

apologist Ravi Zacharias. In his article, Baughman summarized claims he first made two years ago. He said Zacharias falsely used the title “Dr.” and embellished his connections to Oxford and Cambridge Universities. Baughman also disclosed that Zacharias had recently brought a lawsuit against a Canadian couple. In that suit, Zacharias accused the couple of extorting money from him after first sending him sexually explicit photos. The couple claimed that Zacharias solicited those photos but Zacharias denied any wrongdoing. On November 9, Zacharias and the couple settled the suit out of court. The settlement is sealed and Zacharias handled the legal costs personally.
In a series of articles, I plan to evaluate the claims of academic fraud. This post takes up how Zacharias used the title “Dr.”

Is Dr. Zacharias in the House?

In a Patheos post from 2015, Baughman and two co-authors wrote:

The “Dr. Zacharias” Claim
Ravi Zacharias refers to himself in his official bio and in the videos released by his ministry as “Dr. Zacharias.” He frequently appears at academic institutions where the title “Dr.” is generally understood as indicating that the subject has completed a doctoral program.
Mr. Zacharias has no doctoral degree.  He has a Masters of Divinity degree and has done no doctoral work.  He has been awarded multiple honorary doctorates by Christian schools.
Prior to receiving a complaint from us, the Oxford Center for Christian Apologetics, of which Mr. Zacharias is a founding member, claimed at its website that Mr. Zacharias “has been conferred a Doctor of Divinity degree from both Houghton College and Tyndale College and Seminary, Toronto, and a Doctor of Laws degree from Ashbury College (sic), Kentucky.”

Then in his more recent post from earlier this month, Baughman wrote:

Since the early 1980’s, Ravi Zacharias has assertively referred to himself as “Dr. Zacharias” and represented himself as holding multiple doctoral degrees.[vi] His major publishers have been fully on board. HarperCollins lists him as “Ravi Zacharias, PhD”[vii] at the contributor’s page of the 2017 The Jesus Bible, and his author bio at Penguin/Random House says “Zacharias holds three doctorate degrees.”[viii] The Christian publisher Wipf & Stock also refers to him as “Ravi Zacharias, PhD.”[ix]
But Ravi Zacharias has never so much as enrolled in a graduate level academic program, much less completed a doctoral program. He has a Bachelor’s degree and a non-academic Master of Divinity degree, both from obscure religious institutions,[x] and has racked up numerous “honorary doctorate degrees” over the years from supportive Christian schools. That’s it.  Furthermore, Ravi has routinely failed to disclose that his doctorates are merely honorary and has resisted calls to make his official bio clearer in this regard.[xi]

First, Zacharias’ Master of Divinity is a fine degree from Trinity Evangelical Divinity School. TEDS is not an obscure religious institution within the evangelical world. The degree is rigorous and often takes 3 or more years to complete. There is no need to waste any time criticizing his education at TEDS.
However, regarding the use of the title Dr., Baughman is on firmer ground. It cannot be disputed that Zacharias has used and continues to use the title in reference to himself when, in fact, he has not earned a doctorate. To get comment from Zacharias’ ministry, I wrote Ravi Zacharias International Ministry to get a response to Baughman’s criticisms. On behalf of the ministry, Mark DeMoss wrote back with this answer on the doctorate claim:

Neither Ravi nor his ministry has ever claimed he had an earned doctorate—though he has received numerous honorary doctorates. (It’s true that occasional references to Ravi Zacharias in other contexts—such as publishers’ author pages—include “Dr.” in front of his name and Ravi’s staff has been notifying such sources as they become aware of them and asking that they be revised so as not to even give an impression he might have an earned doctorate.)

RZIM is correct. Using Dr. in front of a name does imply that a person has earned a doctoral level degree. What makes this admission so striking is that Zacharias’ ministry has used Dr. in front of Mr. Zacharias’ name frequently. In fact, the ministry continues to use Dr. in front of Zacharias’ name.
Although I can’t find any unambiguous claims of an earned doctorate, there are numerous uses of Dr. Ravi Zacharias on websites controlled by Zacharias prior to 2015 (see below) and there are also more than a few that I found today. If Ravi’s staff is notifying sources, they need to start with Zacharias’ own organizations in India, Canada, Turkey, YouTube, and his own online academy.
Here is a bio from 2014:

Note the wording regarding his honorary doctorates. A lay person could read that and assume he had earned those doctorates since he used the title Dr. and since the word “honorary” was not used. Zacharias has since corrected this on one of his current websites but not on others.
However, some of his current websites still refer to him as Dr. For instance, here is the same paragraph from his current bio at the website for his online academy viewed just today.

This bio has not been changed. I am confused by RZIM’s claim that Ravi Zacharias has not given the impression that he has an earned doctorate since this impression was once widespread and continues today on websites owned by the organization. Furthermore, there doesn’t appear to be any effort to correct ongoing impressions with other organizations. For instance, Gateway Church has Zacharias speak every year at the church and he has been consistently referred to as Dr. Zacharias as he is at an upcoming conference in December.
For good measure, let’s look at a tweet by RZIM India from just over a week ago (check out the entire twitter account):

“Truth by definition is exclusive. To deny it is to affirm it at the same time.” – Dr Ravi Zacharias https://t.co/1LoXe2GBVc #RZIMIndia pic.twitter.com/r5UdtgFCba

Using honorary doctorates in this manner is not considered appropriate. I suspect Ravi Zacharias knows this. I have a follow up set of questions in to the ministry and will report any additional information. It is good that he changed some of the wording in his bio but it is troubling that it was said that he didn’t claim to represent himself as having a doctorate. I do think the ministry should address these issues head on with a unambiguous statement.
UPDATE:
RZIM released a Facebook statement earlier this evening.

I think it is ironic that some of the commenters on this post refer to Zacharias as “Dr. Zacharias.” 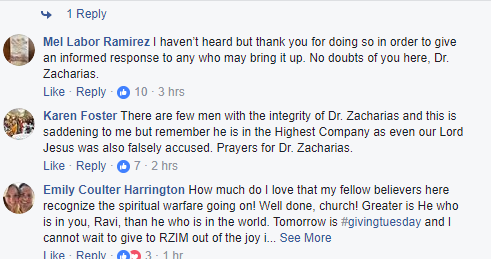 I was hoping for a more humble response from Zacharias but we will see where this goes.
Next up: Was Ravi Zacharias a “visiting scholar” at Cambridge?