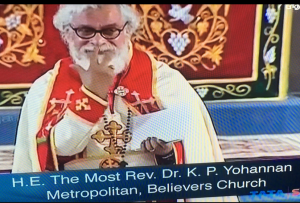 In a surprising development, the nation of India’s Ministry of Home Affairs has cancelled the registration of Gospel for Asia and three related organizations. According to the Times of India, Gospel for Asia (now called Ayana Charitable Trust) was the largest recipient of foreign funds in the nation during fiscal year 2016. The other affiliated organizations which lost registration are Believers’ Church, Last Hour Ministry and Love India Ministry. Believers’ Church is the ecclesiastical arm of GFA in Asia.
In India for a charity to accept foreign funds, the charity must be registered with the Ministry of Home Affairs. The organizations affiliated with Gospel for Asia have traditionally been among the richest in India. In FY 2016, these charities pulled in $206.5-million from foreign donors, most of that from the United States.
Gospel for Asia is the target of two RICO lawsuits in the U.S.  Plaintiffs allege fraud and misuse of funds. At least one of these cases has been slated for trial in 2019. In October of 2015, GFA was evicted from membership in the Evangelical Council for Financial Accountability for multiple violations of EFCA’s financial standards. GFA vowed to regain membership in the financial watchdog but has yet to satisfy ECFA requirements.
In 2016, GFA was sanctioned by the federal Office of Personnel Management for failing to abide program standards. As a consequence, the U.S. government banned GFA from accepting donations from federal employees during the annual workplace charitable fund drive.
In 2015, it was learned that GFA leaders asked student visitors to India to take U.S. dollars into India without reporting the funds to customs officials.
Below is the cancellation notice on India Ministry of Home Affairs website for Ayana Charitable Trust (formerly Gospel for Asia in India).

GFA does business in India under other organizational names that apparently have not been cancelled (e.g., New Hope Foundation, Holy Spirit Ministries) but most funds go to the four cancelled entities. In practice, the move might not immediately hurt Believers’ Church and GFA in India because the organization has hoarded so much cash over the past decade.