I reported earlier this week that Garland and Phyllis Murphy, former Gospel for Asia donors filed a motion to join the RICO lawsuit initiated by Matthew and Jennifer Dickson. A separate suit was filed yesterday by the Murphys. 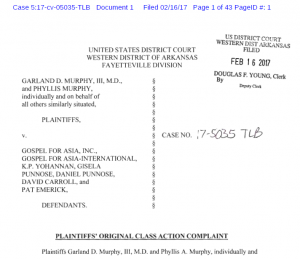 Plaintiffs’ Motion to Withdraw Proposed Intervention Motion
Plaintiffs respectfully move the Court to withdraw the motion to intervene [Doc. 48] filed on February 6, 2017. The proposed intervenors, Garland D. Murphy, III, M.D. and Phyllis A. Murphy, filed an independent but related action on February 16, 2017 which was assigned Case No. 5:17-cv-05035-TLB. Defendants do not oppose this motion to withdraw.

So now GFA is defending itself against two RICO lawsuits with the potential for others to join the existing classes or for additional suits to be filed.