Over a year after the last service was held at Mars Hill Church, there are still stories to be told.
Recently, I acquired two memos which provide details about Mars Hill Global, a mysterious aspect of the demise of Mars Hill Church. From 2012 until mid-2014, Mars Hill Church marketed Mars Hill Global as a fund to help support church planters in India and Ethiopia. However, at least some insiders at Mars Hill knew that the donations given through the Global Fund were spent primarily on church planting expenses in the United States. One memo I posted in 2014 suggested that international projects would bring in lots of dollars which could in turn be used to fuel domestic expansion.
Once I started asking questions about Mars Hill Global, changes began to happen on the Mars Hill website. Because initially the changes were unexplained, I made a video documenting at least one of the major changes. This was in response to claims from Mars Hill’s leaders that the Global Fund was not really a fund but a source of funds from donors who were not part of Mars Hill’s churches. As I demonstrate, this explanation seemed problematic at the time since Mars Hill members could either give to the general fund which was unrestricted or to the Global Fund which was presented to the church after 2012 as a fund to spread the Gospel outside of the U.S., especially in India and Ethiopia.
[youtube]https://www.youtube.com/watch?v=a4EFX3-RXyg[/youtube]
An accounting of how Global Fund donations were spent has been an ongoing desire of many former Mars Hill members. In addition to wondering how the funds from church liquidation have been spent, former members still want to know how much money went to international mission efforts (see this petition).
The first of the two memos I have acquired on the subject was sent in June 2014. It was addressed to the lead pastors of the 15 locations and summarized the Board of Advisors and Accountability’s response to questions about Mars Hill Global which I began raising in May. In this we learn that Mars Hill Church leaders worked with Dan Busby of the Evangelical Council for Financial Accountability to change the messaging surrounding Mars Hill Global. According to this memo, Busby approved the decision to keep private the details about how much was actually spent on missions. Click on each thumbnail below to read the memo.

For now, I would like to pull out one important section: 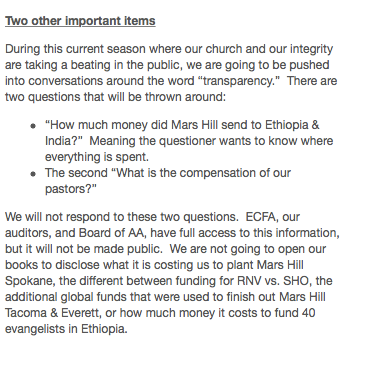 In this memo, the BOAA and the ECFA specifically rejected transparency. While I have reason to believe that the decision was not unanimous among the executive elders (Mark Driscoll, Sutton Turner and Dave Bruskas) and BOAA, it is stunning that Mars Hill’s leaders withheld that information. As a non-profit accountable to the public and a church accountable to those who gave the money, this information should have been disclosed. However, for some reason, the information appears to be considered classified also by those currently wrapping up Mars Hill’s affairs. After he left Mars Hill, Sutton Turner planned to release the information but was warned by Mars Hill lawyers not to.
Looking back, one of the executive elders, Dave Bruskas told me in an email that he thinks more disclosure was warranted. Bruskas said:

In hindsight, I think itemizing money spent on domestic church planting, international church planting and relief efforts would have been helpful for donors and the general public.  I also think aggregating salaries in the separate line items of local church staffing costs and central staffing costs (including executive salaries) rather than lumping all compensation into a single category of “Personnel Costs” would have given donors and the general public a better picture of how donations were being spent.

The other memo, sent in early July, provides some insight into how much money was given via the the Global designation.

In this memo, the figure of $3-million for Mars Hill Global was projected for fiscal year 2015 based on comparable giving in FY 2014. For most of FY 2014 (July 2013-June 2014), donors had the option of designating Global Fund via the drop down menu. In the image above taken from the first memo, the Mars Hill BOAA decided not to reveal how much it cost to support 40 Ethiopia church planters. However, this can estimated since it was known that Mars Hill partnered with New Covenant Foundation which suggests $170/month/church planter. Mars Hill supporter 40 such families which leads to $81,600 if the support was full. They also supported Indian missionaries and did some translation work.*
These memos confirm much of what was speculation in 2014. Where I disagree with the thrust of this memo is the only mistake was to leave Global Fund on the Giving Page drop down menu. As I documented repeatedly in 2014, Mars Hill marketed Mars Hill Global as the way Mars Hill Church did missions. I don’t read that in these memos.

*Keep in mind, these are estimates since Mars Hill’s leaders both before and after the church closed failed to disclose the exact figures. The memos provide a bit more confirmation that the estimates are close.