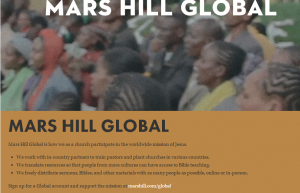 The long anticipated suit from a group of former members against former leaders of Mars Hill Church was filed today in the U.S District Court for the Western District of Washington in Seattle. Attorney Brian Fahling filed suit on behalf of plaintiffs Brian and Connie Jacobsen and Ryan and Arica Kildea.
The plaintiffs accuse defendants Mark Driscoll and Sutton Turner of engaging in

a continuing pattern of racketeering activity by soliciting, through the internet and the mail, contributions for designated purposes, and then fraudulently used significant portions of those designated contributions for other, unauthorized purposes. It was a pattern of racketeering activity that extended through a myriad of MHC projects, including the Global Fund, the Campus Fund, the Jesus Festival, and the promotion of Driscoll’s book Real Marriage: The Truth About Sex, Friendship, and Life Together (“Real Marriage”).

In a statement, the attorney filing the suit, Brian Fahling said:

A church is not simply a building and programs. Mars Hill Church was a community of individuals—non-member attendees who considered MHC to be their church home, members, elders and pastors—who worked together in pursuit of a common mission—to make disciples and plant churches in the name of Jesus. Needless to say, the four groups are interdependent and the church cannot function without each of them. However, Driscoll and Turner engaged in a pattern of racketeering activity so deeply embedded, pervasive and continuous, that it was effectively institutionalized as a business practice, thereby corrupting the very mission Plaintiffs and other donors believed they were supporting.

On the Global Fund, just today I posted two formerly undisclosed memos on Mars Hill Church’s Board of Advisors and Accountability’s decision to keep secret how the church spent funds on missions (Global Fund) and salaries.
It is interesting to see ECFA named as a co-conspirator in the suit. The memo disclosed earlier today indicates that Dan Busby approved the moves of Mars Hill Church to address the Global Fund and apparently had no problem with the lack of transparency. In contrast, Busby and the ECFA took a turn toward transparency by removing Gospel for Asia from membership in October of 2015.
While it is a sad day to see these matters come to civil court, perhaps this will lead to a settlement and closure.
Read the lawsuit by clicking the link.