Repeatedly, Gospel for Asia has proclaimed that 100% of donation goes to the mission field. Now, after having their ECFA membership terminated, the wording regarding donations has changed. From the “Financial Integrity” page: 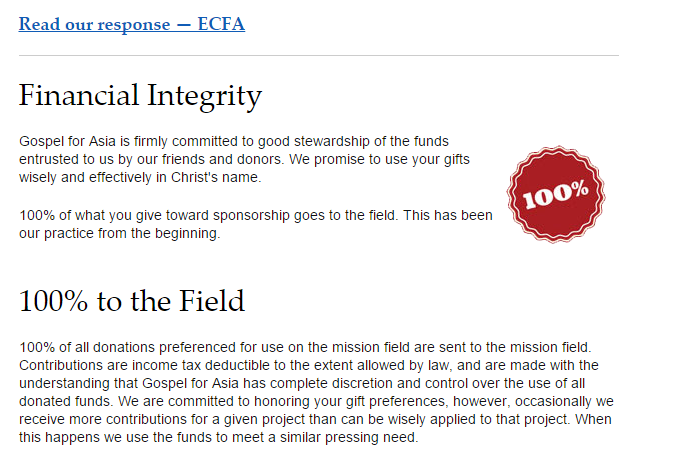 What does “preferenced” mean?  Does it mean something different than “designated?”
Donors should read the second sentence carefully:

Contributions are income tax deductible to the extent allowed by law, and are made with the understanding that Gospel for Asia has complete discretion and control over the use of all donated funds.

As I read it, this sentence allows GFA to spend donations anyway they want to, even in ways that you might not prefer.
GFA might also be addressing the IRS requirement that donated funds come under the discretion and control of the non-profit. Is that the case now? Does GFA actually control what they give in India? In times past, the leaders have been unclear about how they do that.
I will say that the last sentence is revealing. I demonstrated early on that GFA has millions sitting in Indian banks. Last year, an Indian court ruled that GFA/Believers’ Church spent some of their funds in ways donors did not intend. Now, with this disclaimer, GFA can raise money using popular causes as a marketing tool, then take the excess and do whatever K.P. and crew want. If we can believe ECFA, it appears that donor intent has not been carefully followed prior to this new phrasing.
In any case, perhaps this new wording satisfies some legalese requirement, but it isn’t clear to me what GFA is promising.