Other than to operate the School of Discipleship, Gospel for Asia in Texas appears to exist to collect donations and send them to various countries in Asia where locals carry out various charitable and religious activities. The foreign donations are wired (or smuggled) to NGOs in India and other nations in Asia. According to GFA’s 2013 audit financial statement nearly $60.1 million dollars were wired to five GFA related parties in India, Myanmar, Nepal, Sri Lanka, and Bangladesh. See below:

In addition, we know that GFA also sent money to Believers’ Church, Last Hour Ministry, and Love India Ministry, three NGOs registered with the Indian government. For some reason, these transactions were not disclosed in the 2013 audit as related party transactions, even though K.P. Yohannan is involved with those organizations. These contributions claimed by GFA to the related parties is a substantial part of what GFA takes in from American donors. As I have pointed out before, a substantial amount of this money does not show up on reports of foreign contributions which are required to be filed with the Indian government (see below).
These facts might be of some consequence if the IRS decides to look into GFA’s operations. In June of this year, the Evangelical Council for Financial Accountability posted the following advice for member organizations. As I read it, this advice and the IRS decision has relevance to GFA.

The link leads to a redacted IRS determination regarding tax exempt status of an unnamed organization with most operation in a foreign country. The conclusion was 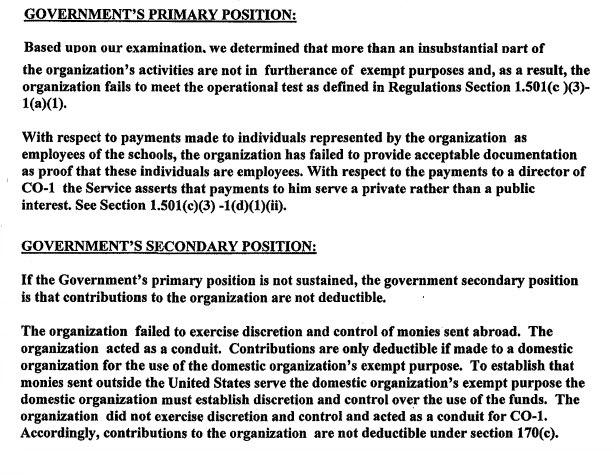 Is GFA-India (and the other countries) a related party or is GFA-United States doing business in India as GFA-India? I may not be asking this precisely but the point of the question is to wonder out loud if GFA leaders in America are in charge of how American contributions are spent in India. The FC-6 reports filed by GFA-India, Believers’ Church, Last Hour Ministry and Love India Ministry indicate that funds are spent for salaries and other operating costs, as was the case with the unnamed charity which was investigated by the IRS. A fair question for GFA is: Who is exercising “discretion and control” of the funds sent to GFA-India, Believers’ Church, Love India Ministry and Last Hour Ministry?
In this context, it is concerning that Believers’ Church, Love India Ministry and Last Hour Ministry are not mentioned in the audit, nor is it clear that GFA-US even claims “discretion and control” of funds sent to these groups. For instance, according to GFA’s website, Believers’ Church and GFA have no “legal binding” relationship:

How then can GFA-US have “discretion and control” of the funds donated to GFA but given by GFA to Believers’ Church?  Perhaps that is why BC builds hospitals and schools and runs a micro-finance lending organization and in Myanmar even sponsors a soccer team.
It is troubling that millions of dollars of donor money are unaccounted for in India. Recall that Canadian pastor Bruce Morrison received no answers when he asked GFA leaders why $43.5 million of American and Canadian donations was not reported in India.  Morrison’s findings mirror mine and those of auditor Jason Watkins who examined public records of 2013 GFA spending: 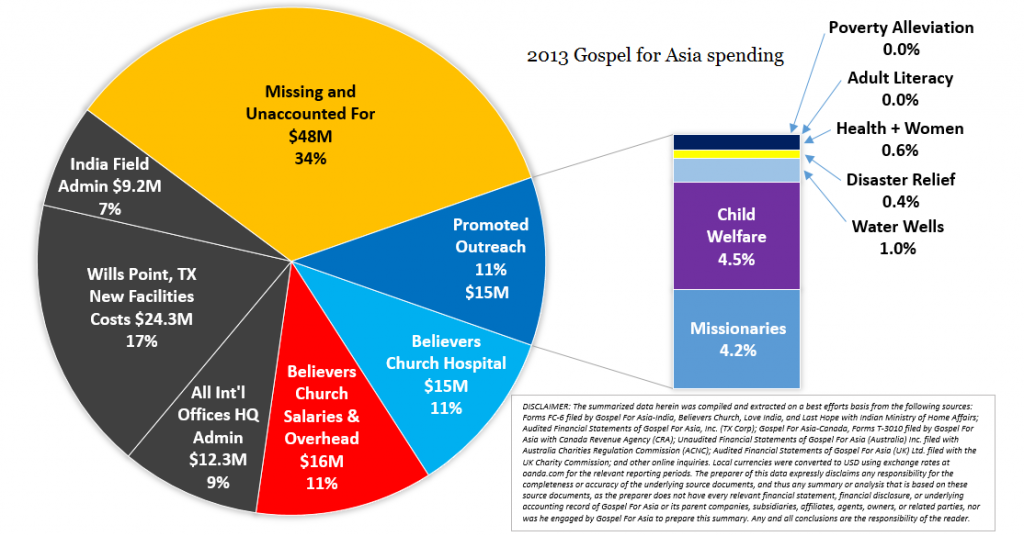 Watkins found more funds missing ($48 v. Morrison’s $43.5 million) because he also examined records from the UK and Australia.
Since these funds are unaccounted for in India, then how can GFA-US make a case that it is exercising appropriate “discretion and control?” If GFA does have “discretion and control” over these tax-exempt funds, then why does GFA fail to answers questions from the public and donors about where the money goes?
Add these question to the growing list.