Sometime in 2013, Mercury One, a non-profit founded by Glenn Beck but run by principal officer David Barton, gave $100,000 to Barton’s Wallbuilders, also a non-profit run by Barton. Such gifts appear to be questionable under IRS guidelines addressing gifts which benefit insiders.
Barton founded and is head of Wallbuilders, and was recently tapped to run the Keep the Promise group of Super PACs with over $38 million to spend supporting Ted Cruz.
On Mercury One’s 2013 990 form, Barton is listed in box F as the principal officer: 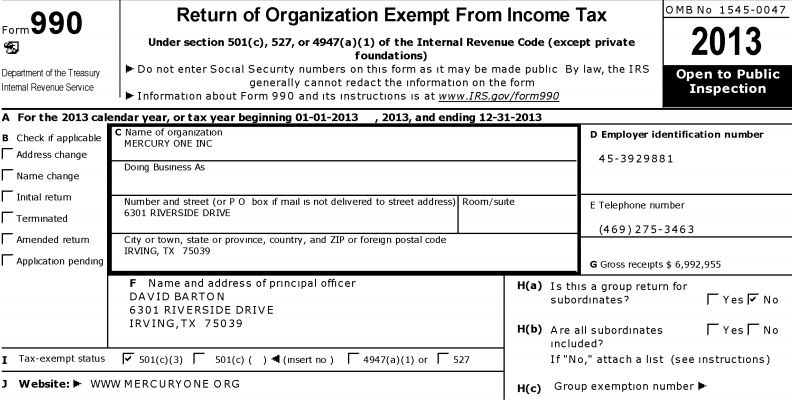 Thus, if Mercury One filed the 990 properly, Barton has ultimate responsibility for operating the non-profit. Without examining anything else, that is a noteworthy finding.
Barton is also listed as officer along with only two other board members, Glenn Beck’s wife and his longtime attorney and researcher, Joseph Kerry.

Certainly by the standards of the Evangelical Council for Financial Accountability, this is an unacceptable composition for a board. None of these people are independent and it seems improper for Kerry to assume three positions. As principal officer, Barton only needs one other person to vote with him to do anything.
Later, the 990 reports that Wallbuilders received $100, 000. This gift accounts for about 7.5% of the income Wallbuilders received in gifts and grants in 2013.

According to the IRS, non-profits are for the public interest and not private interest.

Private Benefit and Inurement
A public charity is prohibited from allowing more than an insubstantial accrual of private benefit to individuals or organizations. This restriction is to ensure that a tax-exempt organization serves a public interest, not a private one. If a private benefit is more than incidental, it could jeopardize the organization’s tax-exempt status.
No part of an organization’s net earnings may inure to the benefit of an insider. An insider is a person who has a personal or private interest in the activities of the organization such as an officer, director, or a key employee. This means that an organization is prohibited from allowing its income or assets to accrue to insiders. An example of prohibited inurement would include payment of unreasonable compensation to an insider. Any amount of inurement may be grounds for loss of tax-exempt status.
If a public charity provides an economic benefit to any person who is in a position to exercise substantial influence over its affairs (that exceeds the value of any goods or services provided in consideration), the organization has engaged in an excess benefit transaction. A public charity that engages in such a transaction must report it to the IRS. Excise taxes are imposed on any person who engages in an excess benefit transaction with a public charity, and on any organization manager who knowingly approves such a transaction. (See Reporting Excess Benefit Transactions on page 12).

Only the IRS can make a final determination but this transaction looks like it is worth exploring. Barton certainly is an insider at Mercury One and, via Wallbuilders, he benefited from the gift. The $100,000 is almost as much as Barton reported as compensation in 2013.