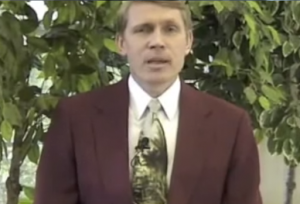 Closing the loop on my earlier articles on Kent Hovind, I can point readers to this piece at Forbes and the judge’s order, filed yesterday, which acquitted Hovind on the contempt of court charge.
Nothing in this order or an earlier dismissal of charges exonerates him on his tax crimes.
I was interested in this primarily because David Barton decided to get involved via his interview of Hovind, a creationist who has run afoul of other creationists on sciency creation science.