Mars Hill Church has claimed copyright violation due to my posting video clips of Pastor Mark Driscoll telling members about Mars Hill Global. Despite hours of Mars Hill material on YouTube, Mars Hill has chosen to aggressively move against the Mars Hill Global content. They also issued a take-down request on a video hosted by YouTube account “muscleman.” That video had been up for months on YouTube, but was targeted the day after I pointed out that Mars Hill removed it from their account.
[youtube]http://youtu.be/YQM_TcGhGys[/youtube]
(Oddly enough, it still plays as an embedded video, but when you try to watch it on You Tube, you get this screen) 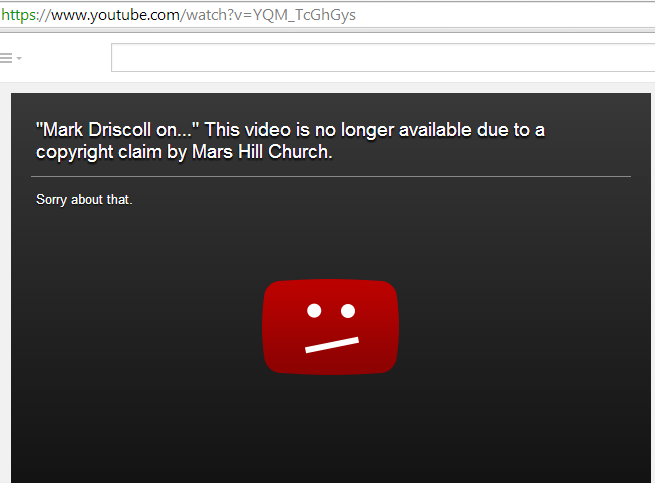 The video posted by “muscleman” is the same one that airs as an ad on YouTube (see this post), and opens many of Mark Driscoll’s sermons on the Mars Hill website (e.g., this one in January, 2014).  The transcript of that video is as follows:

Howdy Mars Hill Church, pastor Sutton Turner here and I’m in Ethiopia, and I just want to thank Jesus for continuing to use Mars Hill Church to make disciples and plant churches. Mars Hill Global is the arm of Mars Hill Church that makes disciples and plant churches all over the world. We not only do church planting, but we help better equip church planters. Most recently, we shipped and now distributed a thousand Bibles into Amharic which is the language here in Ethiopia, and we launched a project to translate Pastor Mark Driscoll’s Doctrine book into Spanish. We have people from over 29 different countries that are giving on a monthly basis to Mars Hill Global.
So whether you’re a member of one of our Mars Hill Church locations in the United States or you’re one of 100,000 podcasters every single week, we encourage you to pray about giving above and beyond your tithe to Mars Hill Global. Thank you and let’s see more materials translated, more pastors sent out, more churches planted, and more people saved by Jesus Christ. (emphasis added)

In the videos I excerpted, Mark Driscoll pointed out to the Mars Hill congregation that through Mars Hill Global they were supporting Ethiopian evangelists. This is in contrast to the recent claims that Mars Hill Global meant money coming from non-members. However in the removed videos, Driscoll clearly owns the ministry Mars Hill Global and points to the congregation as the source of the support for the international mission effort. I continue to believe the videos clips are covered by Fair Use exemptions and am weighing my options.
How strange is this situation? Mars Hill Church has been defending Mars Hill Global, while at the same time they have apologized to the congregation for confusion caused by the way they have referred to Global. Perhaps, they would justify their actions by saying they want to remove confusing content. However, that content has been played multiple times. Just removing it without explanation makes the situation more confusing. It is surreal and demeaning to the public to present a message for years and then change the message suddenly without explanation, acting as if it had always been that way.
This is not the first copyright rodeo. I suspect we will see at least some of these videos again (as we did before).