Well, Mars Hill giveth and Mars Hill taketh away.
Today, I got notice from YouTube that Mars Hill Church filed a copyright claim against me for posting the missing 6 minutes of Mark Driscoll’s sermon on Acts 6 where he talked about Jesus making mistakes.

We have received copyright complaint(s) regarding material you posted, as follows:

Thus, You Tube removed the video. Now all you see is: 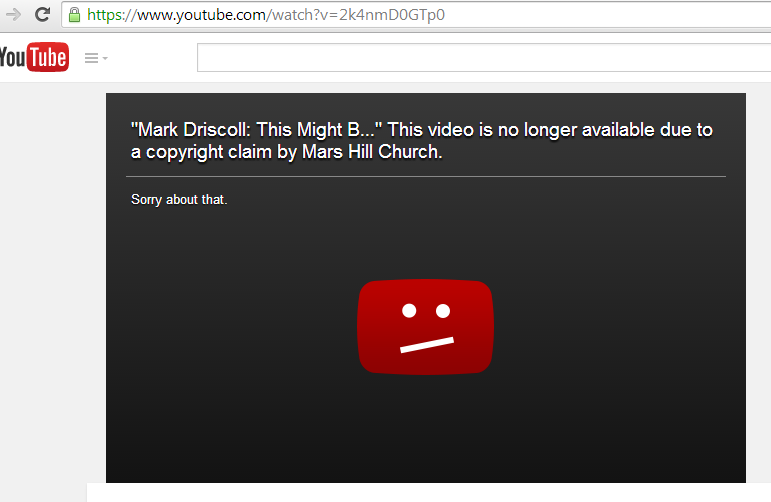 Despite the fact that Mars Hill said the church leaders were fine with the material and didn’t edit it because they felt something was wrong with the content, they have decided they don’t want it seen in this manner. In my opinion, the use of the material falls under the fair use exemption. The sermon was delivered in a public setting with many witnesses and was a part of the total work that I excerpted in order to critique the work in question. The use of the material does not deprive Mars Hill of any income since the sermon is offered for free on their website. I am considering how to respond.
Mars Hill took to their favorite press outlet, Christian Post, to explain that Driscoll’s sermons are edited all of the time, partly for time constraints. The content was defended by Driscoll’s fellow elder, Dave Bruskas. There are good reasons to question the official explanation.
So Mars Hill claims to have removed the video due to time constraints and didn’t object to the content. However, now they have moved to prevent others from seeing the content. There is a transcript on this webpage if you are interested in reading what Driscoll said.
Christianity Today took up the theological implications of the comments but readers will now not be able to hear them.
This morning I praised Mars Hill for taking the high road, but this afternoon, I must reconsider.