On May 24, I wrote that past members of Mars Hill Church’s Media team dispute the official explanation of the deletion of about six minutes of a recent Mark Driscoll sermon on Acts 6:1-7.  After I posted the missing content, Mars Hill spokesmen told the Christian Post that the edits of Mark Driscoll discussing the mistakes of Jesus were in part due to time constraints and not unusual. Furthermore, they stood behind the deleted material. In contrast, former members of Mar Hill who once had responsibility for sermon editing tell me that such edits were not common when they were involved at the church.
From another source, I can provide additional reason to question the official explanation. I have obtained notes preparing franchise campuses for weekly church services. These notes list the duration of the sermon and an outline of Driscoll’s sermon points. The duration listed in the notes for May 18 is about six minutes longer than the edited version of this sermon. 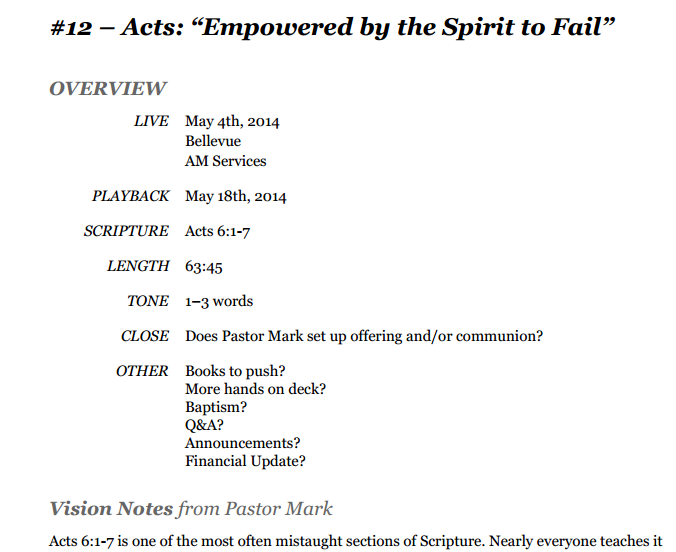 Note the date the sermon was recorded and the scheduled date of playback. The duration of the sermon is 63:45. The version online is 56:41. In fact, the online version presentation on May 18 is much shorter than the comparable videos on May 11 (62:00) and May 25 (63:39). Clearly more was edited from the May 18 presentation than the others in the series. Going back to the initial sermons in the Acts series last year, the video duration when Mark Driscoll preached ranged from 66 to 73 minutes. The only one under an hour from last year is the Sunday Dave Bruskas preached. All of sermons on days Driscoll preached are over an hour. In the entire series, the only online video less than an hour on a Sunday when Mark Driscoll preached is May 18, 2014. In contrast to the claims of the church, the May 18 edits were not business as usual.
I also have the presentation notes for the May 11 and May 25 sermons (click the links to view the relevant sections of the production notes). The procedure is the same for the May 18 sermon. The objective is to edit the sermon (all over 60 minutes) to about 60 minutes. This allows for the initial Mars Hill Global commercial or sermon trailer to take the online video presentation to just over an hour. The initial plan was to edit the sermon slightly to get to about 60 minutes. However, in contrast to normal practice, the May 18 sermon was edited in such a way that the message was cut to about 54 minutes in length, much shorter than any other sermon in the series.
Thus, Mars Hill’s statement to the Christian Post was a half-truth. Yes, they regularly edit the sermons to get the messages to about 60 minutes. However, much more time was taken from the May 18 sermon than any other sermon in the series. If the content was really fine with the leaders then why was that particular 6 minute section removed? There were many pauses throughout the sermon were the video could easily have been trimmed to about 60 minutes without eliminating any content.