On the Institute on the Constitution’s Facebook page, the following image was posted on July 12: 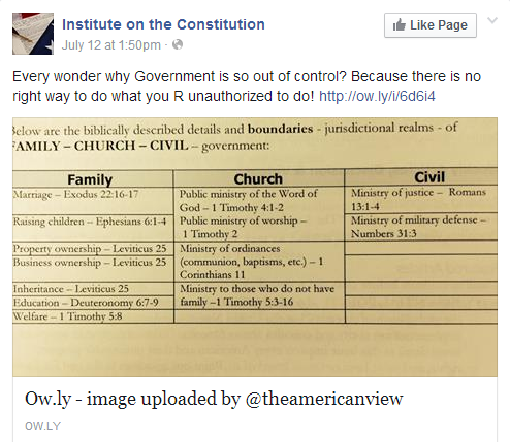 The IOTC teachers Michael Peroutka and David Whitney believe that government has no role in the areas listed under family and church in this image above. This is apparently derived from the work of Abraham Kuyper and Christian reconstructionist Rousas Rushdoony (see this source).
As I looked at this, my reaction was that the IOTC teaches the Constitution of their imagination, not the actual one. According to Article 1, Section 8 of the Constitution, the Congress has the power “to regulate Commerce with foreign Nations, and among the several States, and with the Indian Tribes.” Congress also has the power to establish laws on bankruptcies and to make laws necessary to carry out Congressional powers. However, the IOTC teaches that families have jurisdiction over property and business ownership. Surely, property and business ownership cannot be left to individual families without some form of government regulation to protect the rights of all concerned. Bankruptcies involve individuals (often involving personal property and business ownership) but according to the Constitution, the Congress has the power to make laws regarding this aspect of commerce. Does the IOTC teachers think the Constitution has too much power?
Article 3, Section 2 establishes the courts to decide disputes between citizens over lands (property ownership) as well as other disputes between citizens. The actual Constitution gives citizens a judicial system as a protection. Families may not violate the rights of their members simply because they are biologically related. Churches may not violate the rights of their members simply because a member has signed a church covenant.
Article 4, Sections 2 requires that citizens in one state have the same rights in the several states. Article 6 makes the Constitution the supreme law in the land. The 7th Amendment in the Bill of Rights provides for the right of jury trial. Families and churches cannot claim exemption when disputes arise involving those spheres.
Families can govern their affairs, and churches have freedom to hold their beliefs sacred, unless those activities conflict with the Constitution and the powers given to civil government by it. We will always have debates about what those various limits are, but civil government has a much wider jurisdiction in the actual Constitution than in the one the IOTC teaches.
The IOTC course which is sweeping through Ohio and Maryland especially is particularly dangerous because it claims to teach about the U.S. Constitution but actually seeks to place the Christian reconstructionist interpretation of the Bible over the Constitution.
I prefer the actual Constitution.